The Guardian Reports: Where is US Aid Money Going?

The Guardian Reports: Where is US Aid Money Going?
23
SHARES
ShareTweetMail
Cholera Crisis in Haiti, Four Years on from Disaster
Four Years On: Post-Earthquake Facts and Figures

The Guardian Reports: Where is US Aid Money Going?

American companies and NGOs continue to receive the lion’s share of US aid funding for projects in Haiti four years after the earthquake that levelled the capital Port-au-Prince, despite US government promises to spend more money through local organisations.

Data released by the US agency for international development (USAid) last year shows it spent more than $270m on projects in Haiti in 2013, with US-based companies receiving almost half of this and American non-profits a further 37%. One Washington-based company, Chemonics International, received more than $58m of USAid funding for agriculture, infrastructure and other projects.

Critics have argued for years that donors’ practice of spending aid money through organisations located in their own countries has hampered efforts to build self-sufficiency abroad, and works to the detriment of local businesses and industries.

Vijaya Ramachandran, senior fellow at the Center for Global Development thinktank in Washington, said working more closely with Haitian organisations could help to bolster the country’s long-term development prospects. “As the effort shifts from relief to recovery there’s a lot more you could be doing with local organisations,” she said. 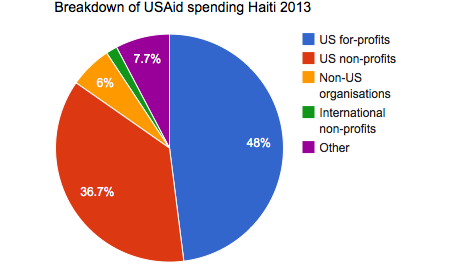 A USAid official acknowledged that more needed to be done, and said the agency was committed to increasing the number of Haitian groups with which it partners directly.

She said giving money directly to Haitian groups had been a challenge in part because few have sufficient internal financial controls. USAid has worked indirectly with 400 Haitian organisations through sub-contracts and sub-awards granted by its partners, she added.

Aid donors frequently use subcontractors to implement their projects but this data is rarely, if ever, publicly available. For Ramachandran, Haiti is a prime example of how donors need to do more to translate their high-level commitments to transparency into reality. Until USAid publishes data on sub-contracts, it will be impossible to trace how exactly its money was spent and how much ended up in Haitian hands, she says.

The data that has been published is incomplete. More than 300 records (accounting for almost 6% of total spending in 2013) lack detail on where organisations are located, for example.

The dominance of US organisations in American foreign aid efforts is not just a Haitian story, however. 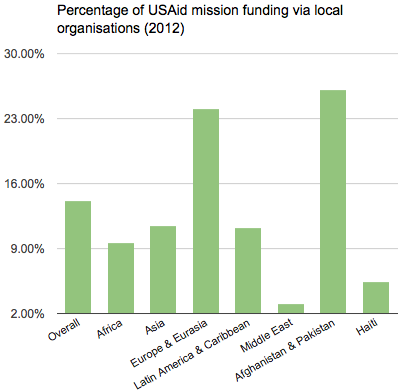 A wide-ranging USAid reform effort, launched in 2010, has promised to raise the percentage of money spent through direct contracts with local private businesses and has a target to disburse 30% of funding through local institutions – including governments and NGOs – by 2015.

In 2011, USAid administrator Rajiv Shah warned that the aid industry “is full of incentives designed to prolong our efforts rather than reduce them or enable transitions” and said his agency would no longer be satisfied with “writing big cheques to big contractors and calling it development”.

In Haiti, the largest USAid spending areas in 2013 were health (25%) and humanitarian assistance (22%); both were dominated by US-based organisations, which received 98% and 82% of funding respectively. Agriculture was the third-largest spending area (11%).

The full data for 2013 USAid spending for projects in Haiti, and for local procurement in 2012, is below. What can you do with it?

Cholera Crisis in Haiti, Four Years on from Disaster