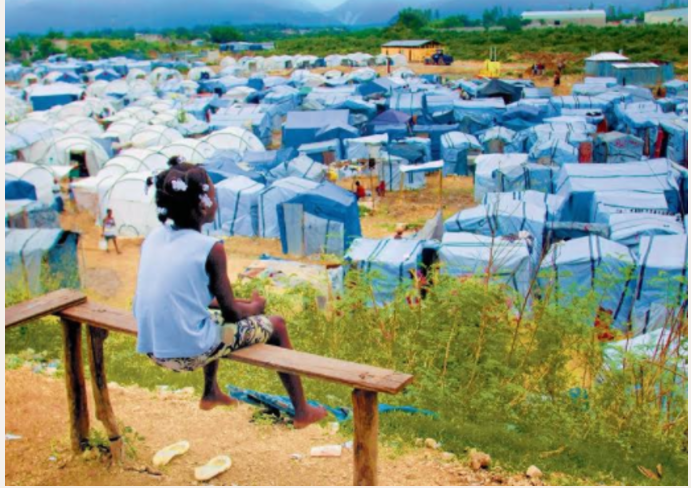 Urban Botox in Haiti
Filing for Divorce From the U.S.

Saving Haiti and Leaving Behind a Disaster…by Jonathan M. Katz (Palgrave MacMillan, 2013, US$26.00)

The best book yet on the earthquake and its on-the-ground consequences, The Big Truck that Went By is the journalistic memoir of Port-au-Prince resident and Associated Press reporter Jonathan Katz in the year that followed the disaster.

It has two great strengths that single it out from the pack: one, the author knows the historical, political, social and above all aid/development context in which this all took place, having lived in Haiti for three years before January 10, 2010. Two, Katz is a professional reporter: it was his job to follow leads, ask questions, find out, draw conclusions — all of which he does with skill, sense and not a little sensitivity.

“I wanted to write this book to understand how a massive humanitarian effort, led by the most powerful nation in the world – my country – could cause so much harm and heartache in another that wanted its help so badly,” Katz writes in the introduction. The writer does just that, so the reader can indeed understand.

Through chapters on his own experience, with one foot either side of the blan/nèg divide; through the personal stories of Haitians he knows and follows through the year; through his investigation of the creation of the Corail-Cesselesse IDP camp; through his depiction of the aid circus and the fleeting visits of it ringmasters, Bill and Hillary Clinton, Ban Ki-Moon, and Paul Farmer; and, above all, through the story of how the UN brought cholera to Haiti then tried to deny it, Jonathan Katz succeeds compellingly, in a chronological, page-turning, narrative style.

This is not the snapshot image of those visiting features writers from US dailies or the “Dear Diary” reflections of those youthful here-there-and-everywhere NGO trainees. Here the big questions behind the real stories are asked.

What is humanitarian aid or development in a country where the means and motive for distribution of the former by donors ensures the failure of the latter for Haitians by their government? What greater corruption can there be than that of donors who, in their paranoid determination to avoid it, corrupt themselves and deny any chance of accountability by completely by-passing and thus undermining the Haitian government, which they then blame for a failure to deliver?

Given their own miserable record on transparency, accountability, and corruption in Haiti, let alone at home, would you have any confidence in the UN, EU or US defining any of those terms for Haitians or their government? If you think you know all this, you need to read this book. If you don’t know, it’s in part, at least, because you haven’t read it or anything like it.

Katz demonstrates an unerring ability to hone in on the perfect metaphor. One example that sets the scene is the collapse of the Port-au-Prince primary school, College La Promesse Evangélique in November 2008. Shoddily built, with a third-floor added just months before, its pan-caking collapse and the entombing of more than one hundred of its pupils was exactly what its name prophesized – a Promise of what was to come on January 10, 2010 in thousands of other buildings.

But Katz goes further, detailing how President René Préval would come to the edge of the La Promesse ravine, under cover of darkness and anonymity, long after the international rescuers had left. Here he would stare into the rubble, apparently transfixed. Katz sees with hindsight perhaps what Préval may have seen with foresight: not just what a serious earthquake might do to his overcrowded capital city and country but his government’s impotence to prevent it or respond.

Katz juxtaposes his exchange with Préval at the edge of the ravine in Port-au-Prince with the Haitian President’s speech to the mostly vacant seats at the UN’s General Assembly six weeks before in the wake of a series of hurricanes. Here he sets out for the reader Haiti’s own President’s analysis of how, in his words, “humanitarian aid is delivered in all the wrong ways.”

How little commitment there was to long-term reform and functioning institutions that would make aid unnecessary; how little respect there was for Haiti’s poor as potential partners in development rather than “targets for instruction”; how just a fraction of the aid money disbursed by donors was even spent in Haiti, let alone disbursed to its government as budget support.

If the book has one weakness, it is its greatest strength, Chapter 11: A Gut Feeling. In it Katz tells the full story of how in October 2010, he, more than any other individual journalist, exposed one UN base in Meille as the deadly source of the still potent vibrio cholerae bacteria that, at the last official count had killed 8,259 Haitians and sickened more than 650,000 others. The full story is told in a way the author never could have done as a daily wire reporter. We, and the world, owe him a huge debt of gratitude for the truth.

But there is much more to this story and one of its central themes, the UN’s efforts to deflect and deter blame. To a large extent that story moved to New York with Katz, when he moved to the city to write this book. Although he continued to report the story in his blog (see http://thebigtruck.tumblr.com) and in individual press articles in the year between his departure from Haiti and publication of this book, far too little of that excellent analysis and reporting appears here in this chapter (for one of his latest and best see The UN’s Haitian Shell Game of December 18, 2012 (http://foreignpolicy.com).

Some reviewers have complained that this book offers no solutions. They miss one of its central messages: namely that Haiti is awash with people, plans and projects, mostly foreign, who have solutions for everything they see, but nothing they understand.

“Supporting efforts to give aid directly to local governments, and the goal of building local institutions that operate independently of foreign control, will go exponentially further than cargo planes of tarps and bottled water,” concludes Katz in his Epilogue. “It’s true that we don’t always know what locals will do with that assistance, but that’s the point. It’s up to them.”

Flawed, failed and faulty diagnoses based on the prisms and prescriptions of the donors and their henchmen, rather than the prescriptions of its people, its real people, rather than the economic elite the donors mistake for them, are Haiti’s number one development problem. The Clinton Gospel as Katz terms the Collier Plan, the International Haiti Reconstruction Commission (IHRC), each and every facet of disaster capitalism, they are all not only all cited and chronicled in this book but condemned in context in this book.

Until the diagnosis is correct, Haiti will go on being Exhibit A in aid and development failure. And that gwo machin ki pase — that 18, 16 or even 10 wheeler that went by — will move relentlessly onwards as it hurtles towards the UN Log base, an NGO compound, or one of those WFP warehouses, obscuring the slums and the pedestrians hugging the side of the road in a cloud of dust that is all of its own making.

Below is a video of an event called Reconstructing Haiti that the Haiti Support Group participated in with Jonathan Katz: