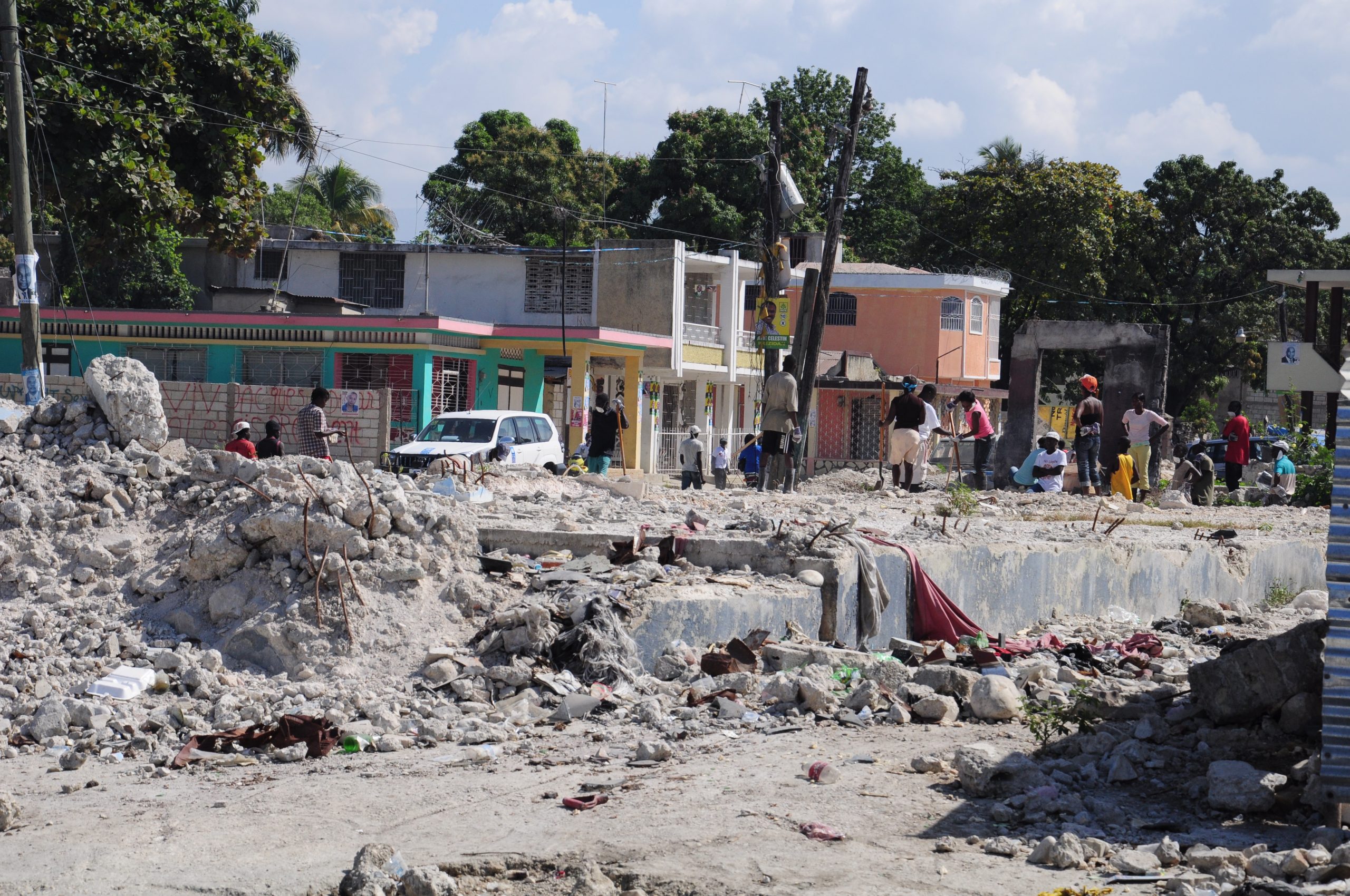 Three years after a devastating earthquake, the “Republic of NGOs” has become the country of the unemployed

“HAITI is open for business”, Michel Martelly, the country’s president since May 2011, likes to proclaim. His government has backed up this talk by making it easier for foreigners to own property and by setting as a goal that Haiti climb into the top 50 countries in the World Bank’s ranking for ease of doing business (it now comes 174th out of 185). In November the president opened a gleaming arrivals hall at Toussaint Louverture airport. Mr Martelly himself is in such constant motion abroad—courting donors and investors, he says—that his peregrinations and the per diems alleged to be associated with them have become a source of mordant jokes.

But gangbuster growth, hoped for as the country rebuilds itself after the earthquake of January 12th 2010 that wrecked the capital, Port-au-Prince, and killed tens of thousands of people, has failed to materialise. In the 12 months to the end of September the economy expanded by a modest 2.5%. It was the second year of dashed expectations: the IMF had forecast growth of 8% in both 2011 and 2012.

Thanks in part to tropical storms that in 2012 inflicted what the UN Food and Agriculture Organisation called “colossal” damage on Haiti’s farmers, the cost of living, especially for food and housing, has risen dramatically. Most of the donor-supported cash-for-work programmes set up after the earthquake have come to an end. Many of the NGOs that thronged the country, and which threatened to eclipse the government, have departed. “We’ve gone from being the Republic of NGOs to the Republic of Unemployment,” says Frantz Duval, the editor of the country’s leading newspaper, Le Nouvelliste. Around three-quarters of Haitians are either unemployed or try to make ends meet in the informal economy.

Mr Martelly won 67.5% of the votes in an election in which less than a quarter of the electorate voted. He remains popular. But his critics grumble that his policies amount to putting Haiti up for sale. They argue that 15-year tax holidays offered to foreign investors will hinder the government’s efforts to cut its dependence on dwindling foreign aid. For the moment this complaint seems academic: despite the tax breaks, as well as the promise of duty-free import of components and export of final goods and cheap labour, few foreign investors have set up shop.

The United States staked its prestige and $124m—its biggest single post-quake investment—on Caracol, an industrial park in the north of the country. So far the park has only one tenant, Sae-A, a South Korean textile manufacturer, with 1,050 workers (though its owners claim the number could rise to 20,000). With its colourfully painted, dedicated power plant, Caracol is still a beautiful ghost town.

Haiti’s prime minister, Laurent Lamothe, a 40-year-old telecoms entrepreneur, calls Caracol a “work in progress”. He says a Haitian-owned paint factory will soon open there, and a Dominican clothing firm recently signed a contract. Some observers think that potential investors are deterred by fear of social instability and lack of clarity over land rights. Mr Lamothe replies that the government is conscious that Haiti lacks a “perfect” business environment but is “making great strides in creating it”.

The problem is that at the same time as Haiti needs investment to generate social stability and economic growth, it also needs social stability and better infrastructure to attract investment. There are some signs of progress, besides the new airport terminal. Most of the earthquake rubble is finally gone from the capital’s streets. The most visible refugee camps have been emptied. Several new hotels, aimed at attracting those elusive business visitors, are due to open. The first of them, the Royal Oasis, welcomed hundreds of high-society Haitians to its opening in December, where they frolicked in its five bars and around its still-unfinished infinity pool.

And yet more than 350,000 Haitians are still living in tents in scattered camps; many of those who have moved out have returned to substandard housing in hillside shanties and seaside slums. A cholera outbreak that has killed more than 7,500 people since October 2010 remains a threat, with cases spiking after each tropical storm. Epidemiologists blame poor hygiene at a military base of the UN peacekeeping mission for the outbreak, though the UN has denied responsibility.

Billions of dollars of aid were pledged to Haiti after the earthquake, amid much talk about “building back better” and working with—not around—the government so as not to perpetuate the “Republic of NGOs”. But according to reports from the Centre for Global Development, a Washington think-tank, and the UN Special Envoy for Haiti, many aid pledges were unfulfilled. And in practice, most of the money that was disbursed went to a handful of international bodies, which mainly spent it on temporary relief (tents, shelters, water-tankers and so on) and the salaries of expat staff. Grand schemes to remake Haiti came almost to nought, partly because they lacked local input: outsiders have finally come round to the view of many Haitians that what is most needed is speedy and cheap housing.

Donor-fatigue is mounting. The UN humanitarian “cluster” system, intended to co-ordinate the response to the crisis, ended with 2012. The UN has launched a new humanitarian appeal for $144m to tackle cholera, homelessness and food shortages, but a similar appeal for $151m in 2012 went largely unfunded.

Direct budget-support for the government totalled less in 2011 and 2012 than before the quake, according to the IMF. The government is also hampered by its lack of suivi, or implementation capacity. Many public employees are time-servers who owe their jobs to past patronage; many in Mr Martelly’s administration lack experience of government. Donors complain that it is hard for them to support projects that lack the proper paperwork. As a result, hospitals stand unfinished. Rebuilding of the main Hôpital Général has stopped.

To fill the gap, Mr Martelly relies on Petrocaribe, an aid scheme set up by Venezuela’s Hugo Chávez, which supplies Haiti and several other countries with subsidised oil. By reselling a chunk of the oil, the government gets up to $400m a year, or about 4% of GDP. Mr Martelly plans to use this to rebuild a corridor of government offices in Port-au-Prince and to pay for several social programmes, including cash transfers to the poorest. The aid comes without the strings that many other donors attach. No wonder that Mr Martelly and Mr Lamothe attended a mass a few days before Christmas to pray for Mr Chávez’s recovery from cancer surgery.