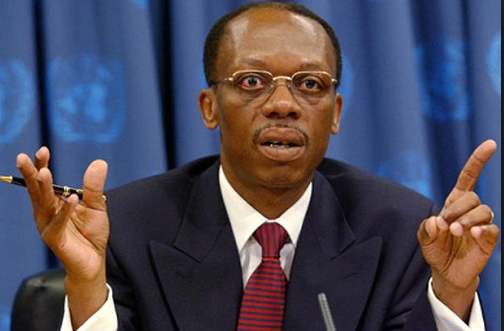 Michele: We have the honor to welcome presently in our studios, President Jean-Bertrand Aristide who insisted on paying a solidarity visit to Haiti Inter on the occasion of this 3rd of March, marking the 11th month since the assassination of Jean Leopold Dominique. President Aristide, welcome.

President Aristide: Thank you Michele. First of all, I salute Jean, and then all those who are listening to us. Today, on the third day of March, I am here, which reminds me that, on a 3rd day of April 11 months ago, I was with you, beside Jean who had already passed away. Yet fortunately, he still lives in us, he lives in all those who are suffering, who are waiting for justice to be done. It is in communion with all the victims that I have come to say to you and to those who wrote this historical letter that is addressed to me, that yes, I am with Jean, with them, with all the victims so as to energize the investigation process and so that justice may shine for them.

Michele: This letter interpellates you Mr. President, on this question of obstruction, obstruction at several levels that we have experienced throughout this investigation. And, thank you for this commitment taken to do justice, a justice for which the Executive Power can do much, Mister President.

Michele: President Aristide, in the letter, the case of Jean Dominique is taken to symbolize many other assassinations, but also a series of problems of security, which exist in this country, and I think that all the civil society organizations, which signed this letter, emphasized the importance we place on the link between insecurity and justice. What do you believe can be done now, not only in order for us to obtain justice, but in order for the families of the victims to obtain security, in order for the families of all Haitians who are afraid of this climate of insecurity which has been developing within Haiti to obtain security?

President Aristide: The first thing they should do, or one of the first things they should do, is what we are doing now. Michele, you are not afraid, you are not afraid to speak of justice. Everyone else who is not afraid to demand justice must keep on demanding justice. In Germany, when there was the Nazi problem, when people were victims of injustice, their parents, their friends, were not afraid. It takes time, but if they were afraid, they never would have obtained justice. The Chilean Mothers, who are always asking for justice, although it has taken a long time, have started to see the light of justice.

Does this mean that I would like to take this much time for us in Haiti? No. After 200 years of exploitation, 200 years of political violence, 200 years of economic violence, it is obvious that if we let fear turn into a cancer that will consume us, it will be more difficult for us to obtain justice. Therefore, the first thing I say is, don’t be afraid.

This morning, I am also happy, even if I am suffering with the victims. When I see how with the letter they link justice, impunity, and insecurity. I will not tolerate the level of insecurity in this country, period. I cannot tolerate it, period. Therefore, with the law at my disposal, I will continue to work to combat insecurity. The more we combat insecurity, the more we will be able to combat impunity, and vise versa. Combating impunity means combating insecurity, combating insecurity means combating impunity, so that everyone, no matter who they are, feels that they may speak freely, circulate freely in a country where it is not arms which rule, but rather the rule of law that provides security.

Michele: There are very concrete issues posed by this insecurity: the problem of arms existing in the country, throughout this country, the issue of justice, because when we think of the victims of the coup, we reflect on the fact that there has been one trial. And I know – I am talking about this trial because I know what importance you attached to this trial, the Raboteau trial, where we obtained a piece of justice. But given that, there are many victims of the coup who are still waiting, still waiting for justice to be served on the FRAPH members, some among them who are circulating freely, others who are abroad, very at ease and very comfortable, what can be done in practice beyond our cry as citizens to say that we want justice?

President Aristide: The government authorities, beginning with myself as Head of State, must do our duties. For example, when I come here, I am doing part of my duty. A letter is written to me by the victims, it is addressed to me; I don’t have the right to remain indifferent. I must hear you, I must do my duty, and moreover it is for this that I am paid. I am a civil servant; therefore I must do my duty. When you speak to me, I must open my ears so as to hear. Once I have heard, I must speak with you. I must explain what I am doing to satisfy you. Therefore my presence here is part of the carrying out of my duty. When the Head of State hears, when the Minister of Justice hears, when the Minister of Interior hears, when the other Ministers hear, when they do their duty — if only by providing transparency, by stating clearly what point they are at in doing their duties – automatically, the Haitian people, who are a great people, who are intelligent, of unusual and exceptional intelligence, will also participate. Thus, we move from transparency to participation. The people will participate by helping the authorities to do their duty.

The same is true for the police. If all police officers, when doing their duty in the street know that the people they meet are with them in doing their duty – by not letting people steal the cars of others, by not letting people steal the belongings of others, by not being frightened and running when they see criminals coming – automatically the morale of the police officers doing the duty will increase, their dignity will be strengthened. Each officer will feel like she/he represents 1,000 persons if she/he is one person, but has 999 ones who are not police officers providing back up on the street, this gives the strength of solidarity that helps the police to do their duty – that is to protect and serve. To protect everyone without distinction, to serve everybody without distinction. Therefore, I think that this is a civic call, which asks for each government authority to take up his or her responsibility. We owe each other solidarity. A blow to one is a blow to all.

No one should have to feel alone in the face of criminals. Everyone should feel that we are one, so that when a criminal is going to attack one person, fear makes him sweat and makes him afraid, because he knows when he attacks one person; he is attacking all those who are around this person. If all Haitians in this country let this message give them strength, insecurity will start to decrease and we can continue to make it decrease, and impunity will also have to decrease because the judges will not be afraid. The judges too are civil servants, you pay them for that. Therefore, they have the obligation to take up their responsibility without letting either intimidation or fear prevent them from doing their duty.

In a word Michele, in the name of my comrade Jean, in the name of all the other victims, without distinction, I shouldn’t play favorites or fail in my duty to cite the names of others. If I were in another setting, I would have begun by citing the name of the victim from that setting. Here, I am at my comrade Jean’s. I will stick with the name of Jean, and next to Jean’s name, I will add the names of other victims without distinction. And to you Michele, I say, I am with you, with the wives of all the other victims, or their husbands, their brothers, their sisters, or their friends. And more than that I am with all Haitians, as the Head of State of all Haitians, so that I may do my duty, as the Constitution requires it. Peace for all. Justice for all. I do not claim demagogically that I can provide this overnight at will. But if this will exists, bit by bit with our steps forward, we will build a state of law in which we may all live peacefully and not in fear. As far as we know many hands make the work light. We can and we will succeed.