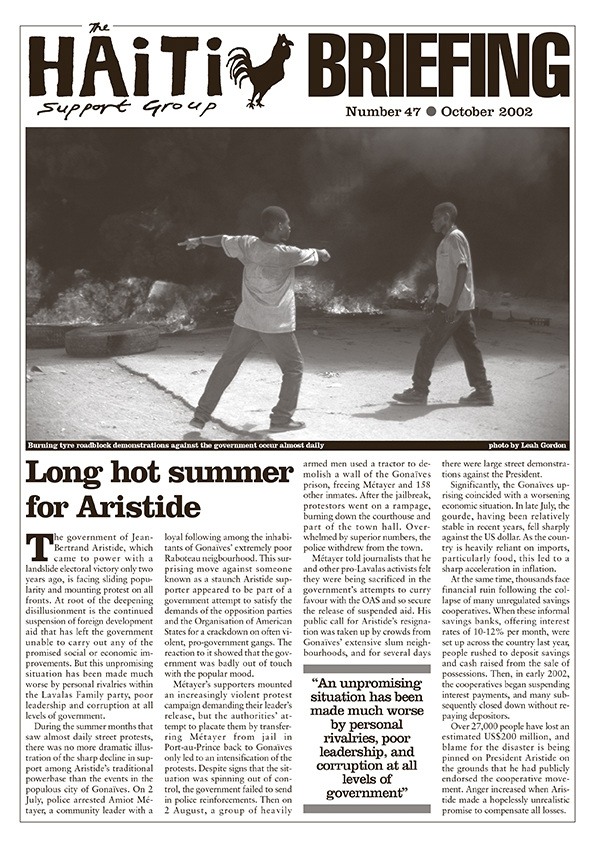 The government of Jean-Bertrand Aristide, which came to power with a landslide electoral victory only two years ago, is facing sliding popularity and mounting protest on all fronts. At root of the deepening disillusionment is the continued suspension of foreign development aid that has left the government unable to carry out any of the promised social or economic improvements. But this unpromising situation has been made much worse by personal rivalries within the Lavalas Family party, poor leadership and corruption at all levels of government.

During the summer months that saw almost daily street protests, there was no more dramatic illustration of the sharp decline in support among Aristide’s traditional powerbase than the events in the populous city of Gonaïves. On 2 July, police arrested Amiot Métayer, a community leader with a

loyal following among the inhabitants of Gonaïves’ extremely poor Raboteau neigbourhood. This surprising move against someone known as a staunch Aristide sup- porter appeared to be part of a government attempt to satisfy the demands of the opposition parties and the Organisation of American States for a crackdown on often violent, pro-government gangs. The reaction to it showed that the government was badly out of touch with the popular mood.

Métayer’s supporters mounted an increasingly violent protest campaign demanding their leader’s release, but the authorities’ at- tempt to placate them by transferring Métayer from jail in Port-au-Prince back to Gonaïves only led to an intensification of the protests. Despite signs that the situation was spinning out of control, the government failed to send in police reinforcements. Then on 2 August, a group of heavily armed men used a tractor to demolish a wall of the Gonaïves prison, freeing Métayer and 158 other inmates. After the jailbreak, protestors went on a rampage, burning down the courthouse and part of the town hall. Over- whelmed by superior numbers, the police withdrew from the town.

Métayer told journalists that he and other pro-Lavalas activists felt they were being sacrificed in the government’s attempts to curry favour with the OAS and so secure the release of suspended aid. His public call for Aristide’s resignation was taken up by crowds from Gonaïves’ extensive slum neighbourhoods, and for several days there were large street demonstrations against the President.

“An unpromising situation has been made much worse by personal rivalries, poor leadership, and corruption at all levels of government”