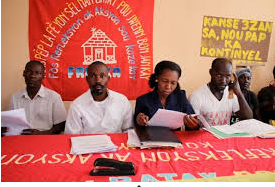 Duvalier on Trial: Justice or Joke?
Earthquake One-Year On: Haitians on Haiti

To Congress, then the TransAfrica Forum, to hear what the three “S es”: Sanon Reyneld, the head of FRAKKA, an advocacy coalition leading the battle for housing in the IDP camps; Mark Schuller, a Haitian Kreyol speaking activist/academic and Mark Synder, an community organiser with International Action Ties. Schuller kicks off with an overview of the results of a survey of conditions in the camps that followed his excellent Unstable Foundations report (see link) last year. There is little improvement to report: 40% of camps have no water at all, there is, on average, one toilet for every 273 people, and only 21% of camps have any NGO management at all. Mark Synder tells the story of the illegal closure – threats and force — of two camps on private land through a power-point presentation. More than 70% of camps are on private land, the vast majority of these having no services at all, private landowners having been very successful at keeping NGOs and others out, making it easier to evict IDPs. But Sanon Reyneld steals the show with his overall analysis. He describes the earthquake as an unnatural disaster – “a social disaster on top of a social disaster;” demonstrates how all kinds of state agencies such as that designed to stimulate public housing starts are being by-passed by the IHRC, the Commission in charge of reconstruction; and how neo-liberalism, the prescription both pre and post earthquake, has already so debilitated the local construction sector that it is unable to respond. Just one example is the privatized cement plant, closed shortly after being sold off because there was more money in the monopoly import of cement made abroad. The price of a bag of cement has now trebled.“Under the IHRC’s reconstruction model the government is expected to raise money then hand it over to the private sector. Government is no more than the front, the intermediary. It is not even an effective regulatory agency any longer.” Ring a bell? Financial sector meltdown, then economic meltdown, US-UK circa 2008?