Facebook
Twitter
WhatsApp
PrevPreviousUrgent Appeal for Queen Marie-Louise Christophe Plaque: A Heritage Crowdfunding Project by Fanm Rebèl
NextJoin the HSG at the Screening of the New Haitian Film FredaNext
Marking the unveiling of a blue plaque dedicated to Marie-Louise Christophe, first and last Queen of Haiti, at her former London residence. 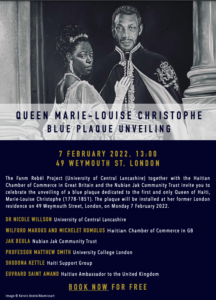 The Haitian Revolution remains, without doubt, one of the most important events in world history. Though the triumphant history of Haiti, which became the first independent Black nation-state in 1804, and the first nation to permanently and universally abolish slavery, is widely overlooked, this is truer still of the histories of Haiti’s heroines.

After the death of her husband and assassination of her sons, Marie-Louise Christophe, Haiti’s first and only queen, travelled to Britain with her daughters in September 1821, where she spent the next three years of her life.

Initially taken in by the abolitionist Thomas Clarkson, she took up various lodgings in Blackheath and Hastings before settling in Marylebone, where she lived until 1824 when she departed with her daughters for Europe.

Marie-Louise was referred to in the Haitian royal almanacs as the ‘auguste reine des haytiens’, and was, according to the nineteenth-century British press, ‘beloved by all ranks and conditions’. Paying homage to the numerous and nameless women, enslaved and free, who fought and died in the struggle for freedom and independence, she created a ceremonial legion of all-women soldiers, known as the ‘Amazones’, who became part of her retinue as queen. In her European exile, she demonstrated an unparalleled courage, resilience and a determination to survive and thrive. While numerous Haitian regimes rose and fell, and she lost many beloved family members during the course of her tumultuous life, she lived according to the maxim of the Haitian Kingdom, ‘Je renais de mes cendres’ (I am reborn from my ashes).

Join us for the unveiling of a Nubian Jak Community Trust blue heritage plaque to be mounted in Marie-Louise’s honour at her former Marylebone residence on 49 Weymouth Street on 7 February 2022 at 13:00.

Guest speakers will include:

Professor Matthew Smith, Centre for the Study of the Legacies of British Slavery, University College London

You can see the documentary which follows Marie-Louise Christophe’s trail in Britain here.