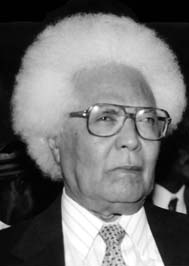 Poet, playwright – Born in Grand-Gossier in 1912 into a family of well-to-do mulattoes, he learnt both French and later English. Morisseau-Leroy studied at Columbia University in New York City. He went on to be a journalist in Paris, and director of the Public Education Office in Haiti, but he is famous for pioneering, and to an extent legitimizing, the use of the Creole language in Haitian literature and the performing arts. He believed that the use of Creole was the best tool for the education of the Haitain people. It was thanks in no small part to his efforts that Jean-Bertrand Aristide declared it an official language when he became president in 1991, at a ceremony where Morisseau-Leroy was one of the guests of honour.

His seminal work was the Creole language version of Sophocles’ play, “Antigone”, which was first performed in 1953 in Port-au-Prince. Up until then, writers and intellectuals had always used the French, and the staging of Antigone was the first time that Haitians could see a play performed in their own language. Outside of the theatre, he was a successful poet, and some of his best poems were contained in the volumes Diacoute (Port-au-Prince, 1953), followed by Diacoute II (Montréal, 1953)

He fled Haiti in 1959, when it became clear the dictator, François Duvalier, considered his work to be subversive, but continued to write and publish poems in Creole from exile in Ghana, and Senegal. His works have also been translated into French, English, German, Russian, Fanti, Twi and Wolof. He finally established himself in Miami with his wife, Renée, and continued writing to the end. He died on 5 September 1998. His work gave generations of Haitians a sense of pride in their native language.