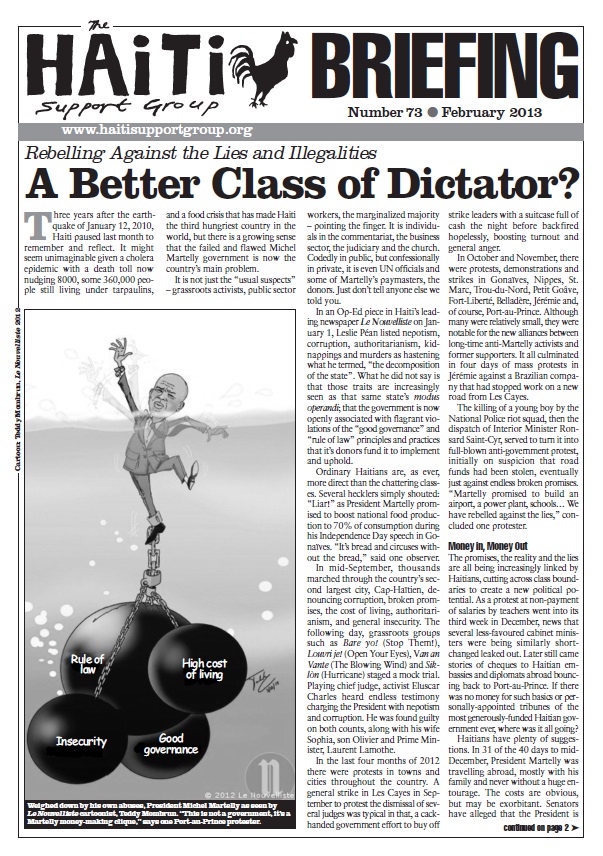 Since the current Haiti Briefing – A Better Class of Dictator?, went to press, President Michel Martelly has been doing his best to prove us spot on, yet again. A major government reshuffle – the third in the past nine months – has put even more leading Duvalierists around the cabinet table. Seven changes include the appointment of hardline former Haitian army officer David Bazile, who is now Interior Minister and Magalie Racine, daughter of notorious former Tonton Macoute militia chief, Madame Max Adolphe, who has become Youth and Sports Minister.

Their political message will doubtless be reinforced by the new Director General of National Radio and Television (RTNH), Emmanuel Ménard, recalled by those with long memories as a leading Duvalier dictatorship propagandist when at Radio Nationale and those with shorter perspectives as a personal adviser to Michel Martelly himself. [For a full list of the government changes and analysis of their import read Haiti Liberte’s excellent article, Martelly Regime Veers Hard Right, here]

Not be left out personally, and perhaps to confirm what’s expected of his new charges, Martelly has now suggested he might unilaterally – and totally illegally – shorten the six-year terms of ten senators, a cohort which includes several leading critics, not least Senator Moïse Jean-Charles. Senate President Simon Dieuseul Desras countered with his own threat, referring obliquely to the illegitimacy of Martelly’s own election. “If we question the terms of one category of elected officials, then we should query the terms of all officials, including the President, and just hold a general election.”

Even allies of the President have publicly served notice that he has gone too far. Senator Wencesclass Lambert warned Martelly that any attempt to reduce the senators’ mandate would precipitate “a new and serious political crisis.” Deputy Patrick Joseph, warned Martelly that he had no authority to even try to make any such change, reminding him that his proposal amounted to a flagrant violation of the constitution he is sworn to uphold.

The irony of Martelly being prepared to invoke powers he does not have to bypass or negate election results when not prepared to use the powers he does have to establish an interim electoral council to supervise long-delayed elections for mayors and senators, has been lost on no one in Haiti. Or indeed in Washington and New York. Last month, even the US government and UN’s super-government saw fit to remind Martelly that whatever the depth of their indulgence of him, he still had to hold “overdue” elections.

Somewhat more whimsically, but no less ironically, Deputy Wilbert Joseph Deshommes recently invited the Haitian President to review “the evidence that the era of dictatorship in Haiti is over.” The problem is that as he creates his new, but old, political reality in Haiti, evidence to the contrary grows daily in everything Martelly says and does as Haiti Briefing No 73, available here, makes clear.