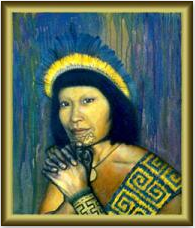 What binds the US, French and Haitian revolutions together?
Learning from past mistakes in Haiti

Taino queen – Born in Yaguana (today the town of Léogâne), the flourishing capital of Xaragua, the most prosperous and heavily populated of the indigenous Taino kingdoms at the time of the European invasion. Anacaona – golden flower in the Taino language – was the younger sister of Béhéchio, king of Xaragua. She was married to the Taino chief, Caonabo, king of Maguana (the Cibao region), who, in 1494, was kidnapped by Christopher Columbus’ troops and deported to Spain. (According to legend, Caonabo died en route to Spain when the Taino captives on board deliberately sank the ship in a last attempt to resist Spanish oppression.) To escape death, Anacaona left Maguana and returned to the western region of Xaragua.

In Xaragua, she soon asserted her authority over her brother and ruled as a queen famed for the ballads, ballets, poetry, plays and ornaments of her court. Xaragua was the only Taino kingdom on the island that had not succumbed to Spanish conquest when a new Spanish governor, Nicholas Ovando, arrived with some 2500 troops in 1502. He requested a meeting with Anacaona, and, in 1503, the Queen and chieftains of the province prepared a lavish reception for him and his men. In the middle of the entertainment, Ovando gave a signal, and the Spanish seized the Xaraguayans, tied them to poles and killed them. Eighty Taino leaders were slaughtered. Anacaona was saved but was captured, and in September 1503 she was taken to Santo Domingo where she was hung.

80 Years On: Revisiting the Massacre