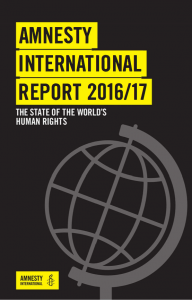 In January presidential and legislative elections scheduled for 17 January and later for 24 January were postponed by the Provisional Electoral Council (CEP) following violent protests, where police were alleged to have used force, in response to allegations of electoral fraud during the first rounds of elections in 2015.

On 5 February a national agreement establishing a transitional government was reached to find a solution to the political crisis. President Martelly ended his mandate on 7 February. Jocelerme Privert was elected interim President and Enex Jean-Charles was appointed as interim Prime Minister. Elections scheduled for April were once again postponed as the Independent Electoral Verification Commission, which was established in April, confirmed that there was widespread fraud during the October 2015 balloting and recommended new elections take place. The CEP issued a new electoral calendar for elections in October and January 2017.

In October, Hurricane Matthew caused the country’s largest humanitarian emergency since the 2010 earthquake, particularly in the southern provinces. More than 500 people were killed and almost as many injured. Extensive flooding and mudslides damaged infrastructure and buildings and caused water shortages. Livelihoods in some areas were almost entirely destroyed while 1.4 million people needed urgent humanitarian assistance. It caused an increase in internal migration from rural areas to overcrowded cities where access to adequate housing was already limited. In this context elections were again postponed and took place on 20 November. Jovenel Moïse was elected as President and was due to be sworn in on 7 February 2017. Although President Privert’s term expired on 14 June, he remained as interim President at the end of the year. The political crisis severely affected the country’s capacity to adopt essential legislation and policies to improve the protection and promotion of human rights.

The mandate of the UN Stabilization Mission in Haiti (MINUSTAH) was renewed for six months in October.

In November, Haiti’s human rights record was examined under the UN Universal Periodic Review (UPR) process. Haiti accepted various recommendations, including to accede to the UN Conventions on Statelessness, to strengthen its legal framework against gender-based violence and to enhance protection of human rights defenders. It rejected recommendations to protect lesbian, gay, bisexual, transgender and intersex (LGBTI) people or to join the ICC.1

Hurricane Matthew affected 2.1 million people across the country, including nearly 900,000 children. One hundred and seventy five thousand people were left homeless. The situation was compounded by the fact that 55,107 were still homeless from the 2010 earthquake and, by November, were living in 31 camps, a number which had hardly decreased since June 2015.

People of Haitian origin continued to arrive spontaneously in Haiti from the Dominican Republic, while others had been deported by the Dominican authorities. About 2,220 of them settled in makeshift camps at the southern border region of Anse-à-Pitre where they lived in dismal conditions with restricted access to water, sanitation, health care and education.2 Despite a relocation programme in operation up until June, dozens of families remained in the camps at the end of the year.

Between January and July, 21,661 suspected cholera cases and 200 related deaths were registered, with nearly 9,000 cases reported after Hurricane Matthew. In August, the UN acknowledged, for the first time, its role in the initial outbreak for which the UN Secretary-General apologized publicly in December. He also announced a new plan to deal with the outbreak. The UN continued to deny all attempts by victims to gain access to legal remedies.

In September, public threats, including by several parliamentarians, were made against individuals and NGOs who were planning an LGBTI Film Festival event. In September, the Public Prosecutor of Port-au-Prince ordered its cancellation for security reasons. In the following days, there was a marked increase in reports of homophobic attacks.

No progress was made in the investigation into alleged crimes against humanity committed by former President Jean-Claude Duvalier and his collaborators.3