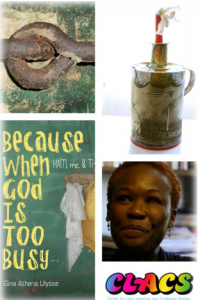 Withering Pasts Or a Rasanblaj of Peculiarities

Using chants, poetry, and photography to confront the past, which looms too largely in the present, Gina Athena Ulysse meditates on historical silences, rebellious rage, and the sacred to affirm ancestral and political imperatives necessary for Black self-determination and self-repossession.

This is the second in a series of annual lectures in memory of Vanessa Knights (1969-2007) who was lecturer in Spanish, Portuguese and Latin American Studies at Newcastle University from 1995 until her early death. Vanessa was well known and respected in her field. Her work dealt with Spanish-speaking cultures of the Iberian Peninsula and, especially, Latin America, focusing on music, literature, and popular culture. She published on the bolero, nationalism, diaspora and science fiction, and feminism and women’s movements in contemporary Spain and Latin America. She was vice-president of Women in Spanish, Portuguese and Latin American Studies in 2003-2004 and was a member of numerous scholarly organisations.

CLACS organises the annual Vanessa Knights Lecture in Latin American and Caribbean Studies, in memory of our colleague Vanessa Knights, who sadly died very young in 2007. If you didn’t know her, you can read about her here.

* Following the lecture we invite you to join us for a drinks reception. All welcome, but please register by emailing [email protected]