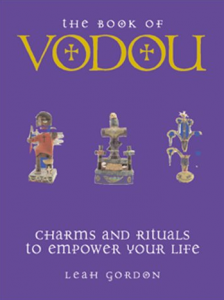 Book of Vodou by Leah Gordon

‘The Book of Vodou’ is an engaging and colourful introduction to the much maligned Haitian religion. Illustrated by a combination of documentary photographs and fascinating art works, artifacts and sacred objects, the book provides an overview of the intricate ceremonies and rituals that make up the practice of Vodou. The religion has a pantheon of spirits who reign over different aspects of life, each with their own identity, ritualistic objects, songs and dances. A large part of the book is devoted to a captivating guide to the dominant spirits, tracing their characters and symbols, and relating their stories, songs and myths. This book is an attractive and accessible precursor to any in-depth study of Haitian culture.

Publisher’s description: Vodou is magic. But it’s also much more! It’s a religion of charms and rituals intended to empower life and bring good fortune to those who practice it. Vodou is a deeply spiritual and visually dazzling religion encompassing rituals, songs, and dances evoking spirits that believers recognize as part of nature. This engrossing account traces its origins in Africa to its full development in the West Indies island of Haiti. It also presents ways readers can use Vodou to enrich their own lives in terms of love, luck, and prosperity. The Book of Vodou covers all-important aspects of its intriguing subject, and brings many Vodou spirits fully alive with vivid, often humorous descriptions. Readers learn how to build their own magic altar and invoke Vodou spirits, how to make charms and amulets, and how to work spells and read signs of divination. More than 120 full-color illustrations.

Walking on Fire: Haitian Women’s Stories of Survival and Resistance

Books on Haiti: Recommendations from the Haiti Support Group

The Sculptors of Grand Rue

Group of 184 is dominated by private sector business associations