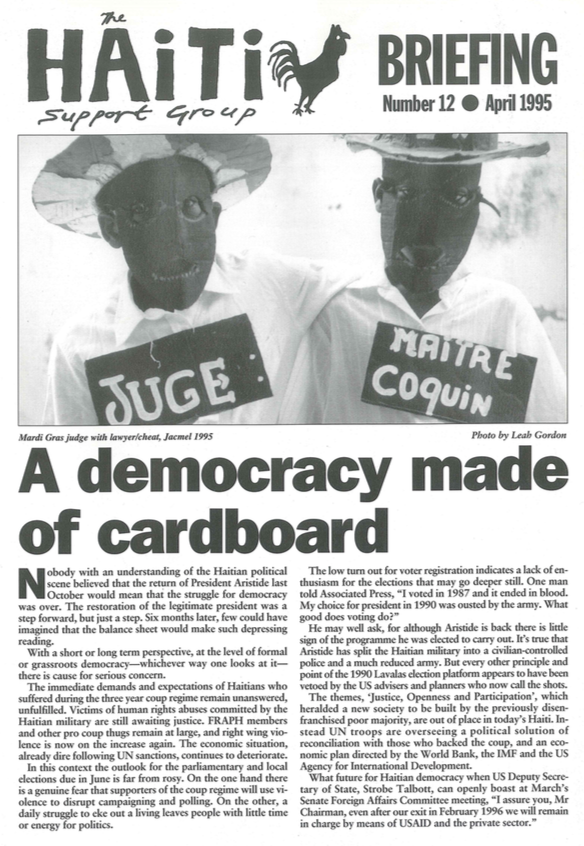 Nobody with an understanding of the Haitian political scene believed that the return of Aristide last October would mean that the struggle for democracy was over. The restoration of the legitimate president was a step forward but just a step. Six months later, few could have imagined that balance sheet would make such depressing reading.

With a short of long term perspective, at the level of formal or grassroots democracy - whichever way one looks at it - there is cause for serious concern.

The immediate demands and expectations of Haitians who suffered during the three year coup regime remain unanswered, unfulfilled. Victims of human rights abuses committed by the Haitian military are still awaiting justice. FRAPH members and other pro coup thugs remain at large, and right wing violence is now on the increase again. The economic situation, already dire following UN sanctions, continues to deteriorate.

In this context the outlook for the parliamentary and local elections due in June is far from rosy. On the one hand there is a genuine fear that supporters of the coup regime will use violence to disrupt campaigning and polling. On the other, a daily struggle to eke out a living leaves people with little time or energy for politics.

The low turn out for voter registration indicates a lack of enthusiasm for the elections that may go deeper still. One man told Associated Press: