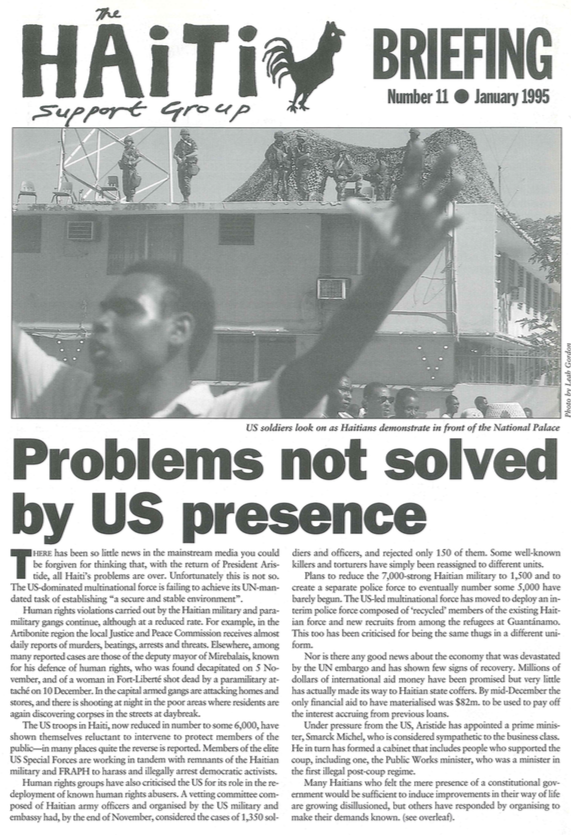 There has been so little news in the mainstream media you could be forgiven for thinking that, with the return of Aristide, all Haiti's problems are over. Unfortunately, this is not so. The US-dominated multinational force is failing to achieve its UN-mandated task of establishing a 'secure and stable environment.'

Human rights violations carried out by the Haitian military and paramilitary gangs continue, although at a reduced rate. For example, in the Artibonite region the local Justice and Peace Commission receives almost daily reports of murders, beatings, arrests and threats. Elsewhere, among many reported cases are those of the deputy mayor of Mirebalais, known for his defence of human rights, who was found decapitated on 5 November, and of a woman in Fort-Liberté shot dead by a paramilitary attaché on 10 December. In the capital armed gangs are attacking homes and stores, and there is shooting at night in the poor areas where residents are again discovering corpses in the streets at daybreak.

The US troops in Haiti, now reduced in number to some 6,000, have shown themselves reluctant to intervene to protect members of the public - in many places quite the reverse is reported. Members of the elite US Special Forces are working in tandem with remnants of the Haitian military and FRAPH to harass and illegally arrest democratic activists.