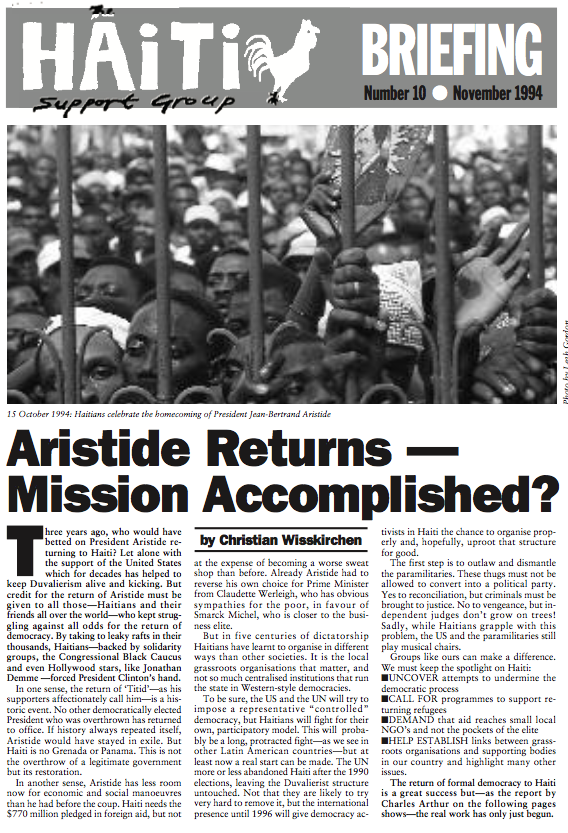 Three years ago, who would have betted on President Aristide returning to Haiti? Let alone with the support of the United States which for decades has helped to keep Duvalierism alive and kicking. But credit for the return of Aristide must be given to all those - Haitians and their friends all over the world - who kept struggling against all odds for the trurn of democracy. By taking to leaky rafts in their thousands, Haitians - backed by solidarity groups, the Congressional Black Caucus and even Hollywood stars, like Jonathan Demme - forced President Clinton's hand.

In one sense, the return of 'Titid' - as his supporters affectionately call him - is a historic event. No other democratically elected President who was overthrown has returned to office. If history always repeated itself, Aristide would have stayed in exile. But Haiti is no Grenada or Panama. This is not the overthrow of a legitimate government but its restoration.

In another sense, Aristide has less room now for economic and social manoeuvres than he had before the coup. Haiti needs the $770 million pledged in foreign aid, but not at the expense of becoming a worse sweat shop than before. Already Aristide had to reverse his own choice for Prime Minister from Claudette Werleigh, who has obvious sympathies for the poor, in favour of Smarck Michel, who is closer to the business elite.