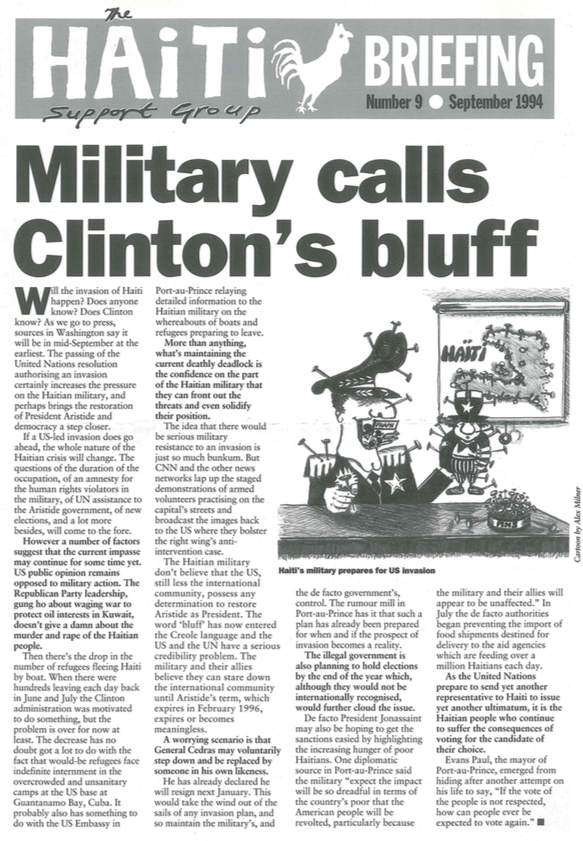 Will the invasion of Haiti happen? Does anyone know? Does Clinton know? As we go to press, sources in Washington say it will be mid-September at the earliest. The passing of the United Nations resolution authorising an invasion certainly increases the pressure on the Haitian military, and perhaps brings the restoration of President Aristide and democracy a step closer.

If a US-led invasion does go ahead, the whole nature of the Haitian crisis will change. The questions of the duration of the occupation, of an amnesty for the human rights violators in the military, of UN assistance to the Aristide government, of new elections, and a lot more besides, will come to the fore.

However, a number of factors suggest that the current impasse may continue for some time yet. US public opinion remains opposed to military action. The Republican Party leadership, gung ho about waging war to protect oil interests in Kuwait, doesn't give a damn about the murder and rape of the Haitian people.

Then there's the drop in the number of refugees fleeing Haiti by boar. When there were hundreds leaving each day back in June and July the Clinton administration was motivated to do something, but the problem is over for now at least. The decrease has no doubt got a lot to do with the fact that would-be refugees face indefinite internment in the overcrowded and unsanitary camps at the US base at Guantanamo Bay, Cuba. It probably also has something to do with the US Embassy in Port=au-Prince relating detailed information to the Haitian military on the whereabouts of boats and refugees preparing to leave.