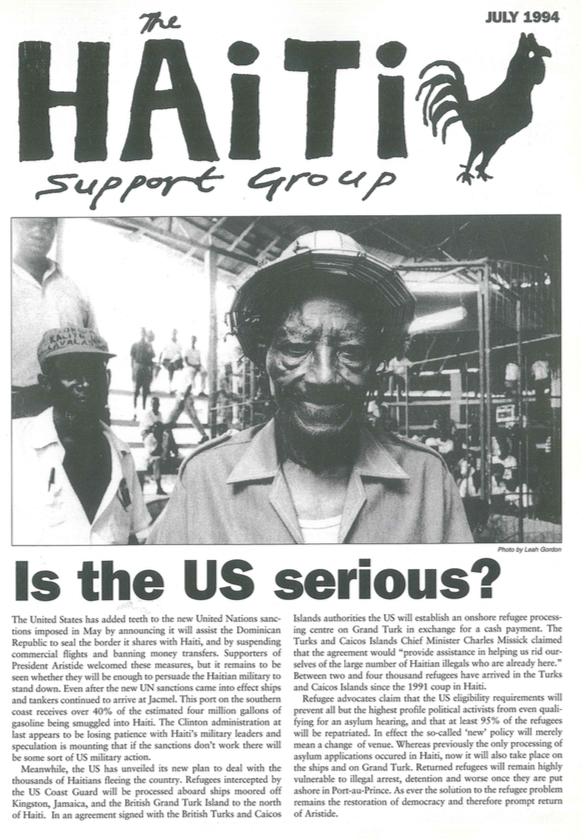 The United States has added teeth to the new United Nations sanctions imposed in May by announcing it will assist the Dominican Republic to seal the border it shares with Haiti, and by suspending commercial flights and banning money transfers. Supporters of President Aristide welcomed these measures, but it remains to be seen whether they will be enough to persuade the Haitian military to stand down. Even after new UN sanctions came into effect ships and tankers continued to arrive at Jacmel. This port on the southern coast receives over 40% of the estimated four million gallons of gasoline being smuggled into Haiti. The Clinton administration at last appears to be losing patience with Haiti's military leaders and speculation is mounting that if the sanctions don't work there will be some sort of US military action.

Meanwhile, the US has unveiled its new plan to deal with the thousands of Haitians fleeing the country. Refugees intercepted by the US Coast GUard will be processed aboard ships moored off Kingston, Jamaica and the British Grand Turk Island to the north of Haiti. In an agreement signed with the British Turks and Caicos Islands authorities in the US will establish an onshore refugee processing centre on Grand Turk in exchange for a cash payment. The Turks and Caicos Islands Chief Minister Charles Missick claimed that the agreement would:

"provide assistance in helping us rid ourselves of the large number of Haitian illegals who are already here."

Between two and four thousands refugees have arrived in the Turks and Caicos Islands since the 1991 coup in Haiti.