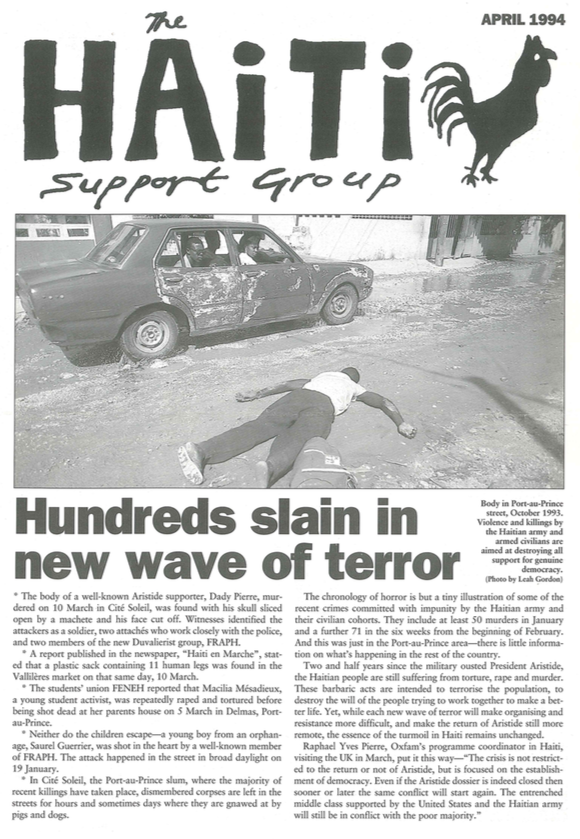 The body of a well-known Aristide supporter, Dady Pierre, murdered on 10 March in Cité Soleil was found with his skull sliced open by machete and his face cut off. Witnesses identified the attackers as a soldier, two atttachés who work closely with the police, and two members of the new Duvalierist group, FRAPH.

A report published in the newspaper, "Haiti en March", stated that a plastic sack containing 11 human legs was found in the Vallilères market on that same day, 10 March.

The students' union FENEH reported that Macilia Mésadieux, a young student activist, was repeatedly raped and tortured before being shot dead at her parents' house on 5 March in Delmas, Port-au-Prince

Neither do the children escape - a young boy from an orphanage, Saurel Guerrier, was shot in the heart by a well-known member of FRAPH. The attack happened in the street in broad daylight on 19 January.

In Cité Soleil, the Port-au-Prince slum, where the majority of recent killings have taken place, dismembered corpses are left in the streets for hours and sometimes days where they are gnawed at by pigs and dogs.

The chronology of horror is but a tiny illustration of some of the recent crimes committed with impunity by the Haitian army and their civilian cohorts. They include at least 50 murders in January and a further 71 in the six weeks from the beginning of February. And this was just in the Port-au-Prince area - there is little information on what's happening in the rest of the country.

Two and a half years since the military ousted President Aristide, the Haitian people are still suffering from torture, rape and murder. These barbaric acts are intended to terrorise the populations, to destroy the will of the people trying to work together to make a better life.