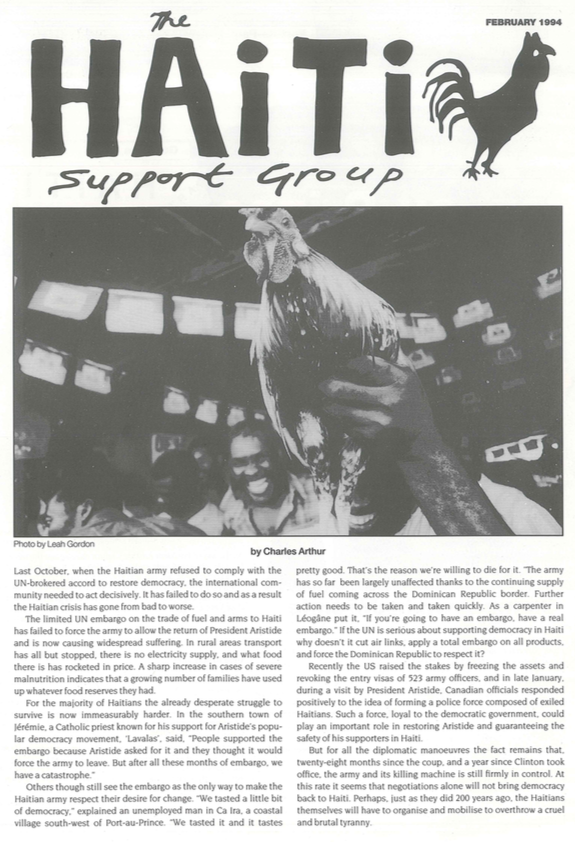 Last October, when the Haitian army refused to comply with the UN-brokered accord to restore democracy, the international community needed to act decisively. It has failed to do so and as a result the Haitian crisis has gone from bad to worse.

The limited UN embargo on the trade of fuel and arms to Haiti has failed to force the army to allow the return of President Aristide and is now causing widespread suffering. In rural areas transport has all but stopped, there is no electricity supply, and what food there is has rocketed in price. A sharp increase in cases of severe malnutrition that a growing number of families have used up whatever food reserves they had.

For the majority of Haitians the already desperate struggle to survive is now immeasurably harder in the southern town of Jérémiw, a Catholic priest known for his support for Aristide's popular democracy movement. 'Lavals' said:

"People supported the embargo because Aristide asked for it and they thought it would force the army to leave. But after all these months of embargo, we have a catastrophe."

Others though still see the embargo as the only way to make the Haitian army respect their desire for change.

"We tasted a little bit of democracy" explained an unemployed man in Ca Ira, a coastal village south-west of Port-au-Prince.