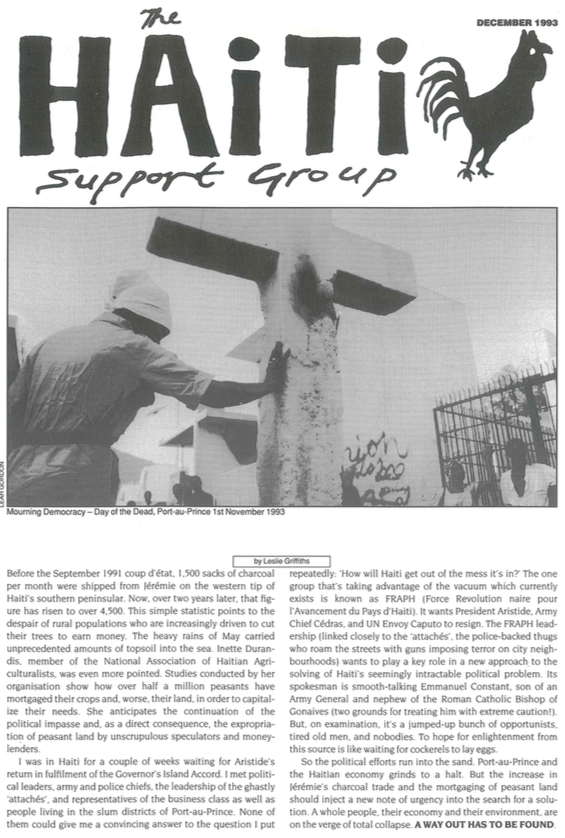 Before the September 1991 coup d'état, 1,500 sacks of charcoal per month were shipped from Jérémie on the western tip of Haiti's southern peninsular. Now, over two years later, that figure has risen to over 4,500. This simple statistic points to the despair of rural populations who are increasingly driven to cut their trees to earn money. The heavy rains of May carried unprecedented amounts of topsoil into the sea. Inette Durandis, member of the National Association of Haitian Agriculturalists, was even more pointed. Studies conducted by her organisation show how over half a million peasants have mortgaged their crops and, worse, their land in order to capitalise their needs. She anticipates the continuation of the political impasse and, as a direct consequence, the expropriation of peasant land by unscrupulous speculators and money-lenders.

I was in Haiti for a couple of weeks waiting for Aristide's return in fulfilment of the Governor's Island Accord. I met political leaders, army and police chiefs, the leadership of the ghastly 'attachés', and representatives of the business class as well as people living in the slum districts of Port-au-Prince. None of them could ever give me a convincing answer to the questions I put repeatedly:

"How will Haiti get out of the mess it's in?"