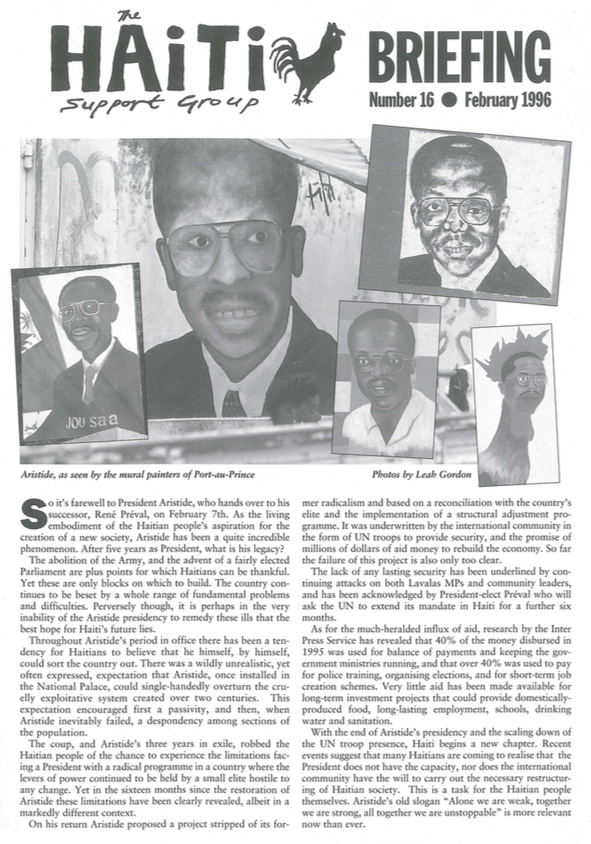 So it's farewell to President Aristide who hands over to his successor, René Préval, on February 7th. As the living embodiment of the Haitian people's aspiration for the creation of a new society, Aristide has been a quite incredible phenomenon. After five years as President, what is his legacy?

The abolition of the Army, and the advent of a fairly elected Parliament are plus points for which Haitians can be thankful. Yet these are only blocks on which to build. The country continues to be beset by a whole range of fundamental problems and difficulties. Perversely though, it is perhaps in the vert inability of the Aristide presidency to remedy these ills that the best hope for Haiti's future lies.

Throughout Aristide's period in office there has been a tendency for Haitians to believe that he himself, by himself, could sort the country out. There was a wildly unrealistic, yet often expressed, expectation that Aristide, once installed in the National Palace, could single-handedly overturn the cruelly exploitative system created over two centuries. This expectation encouraged first a passivity, and then, when Aristide inevitable ;failed, a despondency among sections of the populations.

The coup, and Aristide's three years in exile, robbed the Haitian people of the chance to experience the limitations facing a President with a radical programme in a country where the levers of power continued to be held by a small elite hostile to any change. Yet in the sixteen months since the restoration of Aristide these limitation have been clearly revealed, albeit in a markedly different context.

On his return Aristide proposed a project stripped of its former radicalism and based on a reconciliation with the country's elite and the implementation of a structural adjustment programme. It was underwritten by the international community in the form of UN troops to provide security, and the promise of millions of dollars of aid money to rebuild the economy. So far the failure of this project is also only too clear.