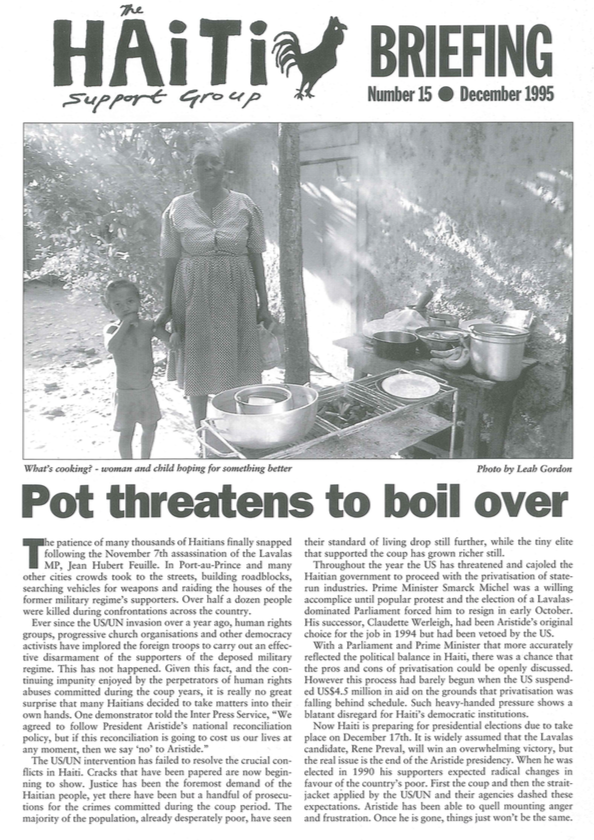 The patience of many thousands of Haitians finally snapped following the November 7th assassination of the Lavalas MP, Jean Hubert Feuille. In Port-au-Prince and many other cities crowds took to the streets, building roadblocks, searching vehicles for weapons and raiding houses of the former military regime's supporters. Over half a dozen people were killed during confrontations across the country.

Ever since the US/UN invasion over a year ago, human rights groups, progressive church organisations and other democracy activists have implored the foreign troops to carry out an effective disarmament of the supporters of the deposed military regime. This has not happened. Given this fact, and the continuing impunity enjoyed by the perpetrators of human rights abuses committed during the coup years, it is really no great surprise that many Haitians decided to take matters into their own hands/ One demonstrator told the Inter Press Service:

"We agreed to follow President Aristide's national reconciliation policy, but if this reconciliation is going to cost us our lives at any moment, then we say 'no' to Aristide."

The US/UN intervention has failed to resolve the crucial conflicts in Haiti. Cracks that have been papered are now beginning to show. Justice has been the foremost demand of the Haitian people, yet there have been but a handful pf prosecutions for the crimes committed during the coup period. The majority of the populations, already depressingly poor, have seen their standard of living drop still further, while the tiny elite that supported the coup has grown richer still.