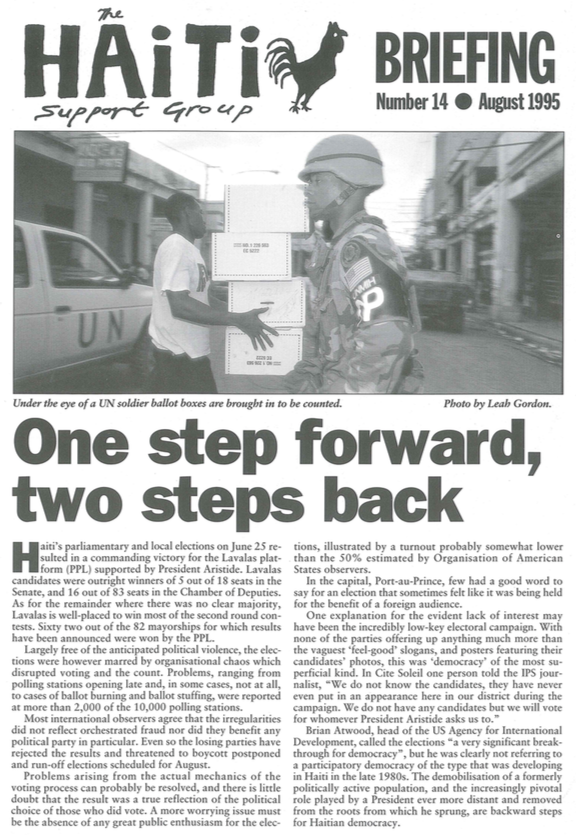 Haiti's parliamentary and local elections on June 25 resulted in a commanding victory for the Lavalas platform (PPL) supported by President Aristide. Lavalas candidates were outright winners of 5 out of 18 seats in the Senate, and 16 out of 83 seats in the Chamber of Deputies. As for the remainder where there was no clear majority, Lavalas is well-placed to win most of the second round contests. Sixty two out of the 82 mayorships for which results have been announced were won by the PPI...

Largely free of the anticipated political violence, the elections were however marred by organisational chaos which disrupted voting and the count. Problems, ranging from polling stations opening late and, in some cases, not at all, to cases of ballot burning and ballot stuffing, were reported at more than 2,000 of the 10,000 polling stations.

Most international observers agree that the irregularities did not reflect orchestrated fraud nor did they benefit any political party in particular. Even so the losing parties have rejected the results and threatened to boycott postponed and run-off elections scheduled for August.

Problems arising from the actual mechanics of the voting process can probably be resolved, and there is little doubt that the result was a true reflection of the political choice of those who did not vote. A more worrying issue must be the absence of any great public enthusiasm for the elections, illustrated by a turnout probably somewhat lower than the 50% estimated by Organisation of American States observers.