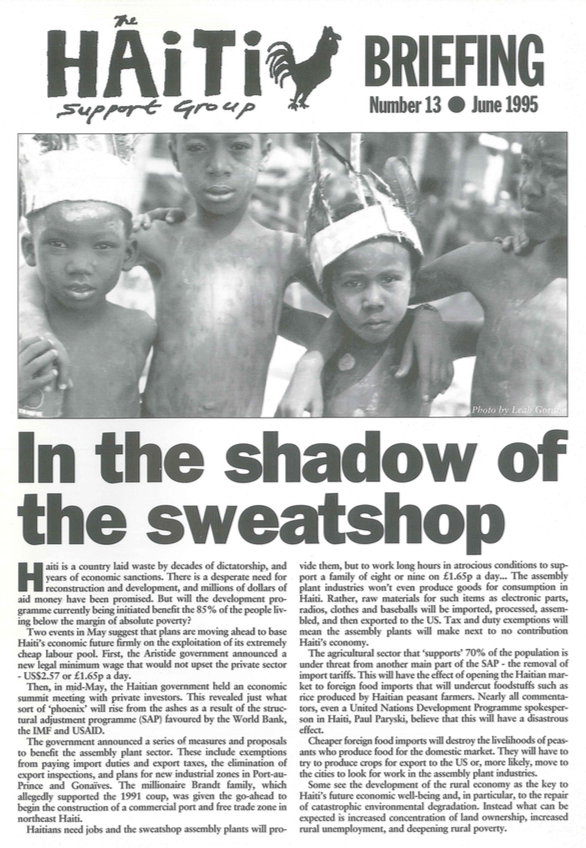 In the Shadow of the Sweatshop . Also featuring information on Harold Pinter Haiti Exhibition.

Haiti is a country laid waste by decades of dictatorship, and years of economic sanctions. There is a desperate need for reconstruction and development, and millions of dollars of aid money have been promised. But will the development programme currently being initiated benefit the 85% of the people living below the margin of absolute poverty?

Two events in May suggest that plans are moving ahead to base Haiti's economic future firmly on the exploitation of its extremely cheap labour pool. First, the Aristide government announced a new legal minimum wage that would not upset the private sector - US$2.57 or £1.65p a day.

Then, in mid-May, the Haitian government held an economic summit meeting with private investors. This revealed just what sort of 'phoenix' will rise from the asked as a result of the structural adjustment programme (SAP) favoured by the World Bank, the IMF and USAID.

The government announced a series of measures and proposals to benefit the assembly plant sector. These include exemptions from paying import duties and export taxes, the elimination of export inspections, and plans for a new indisutrail zones in Port-au-Prince and Gonaïves. The millionaire Brandt family, which allegedly supported the 1991 coup, was given the go-ahead to begin the construction of a commercial port and free trade zone in bortheast Haiti.

Haitians need jobs and the sweatship assembly plants will provide them, but to work long hours in atrocious conditions to support a family of eight or nine on £1.65p a day...The assembly plant industries won't even produce goods for consumption in Haiti. Rather, raw materials for such items as electronic parts, radios, clothes and baseballs will be imported, processed, assembled, and then exported to the US. Tax and duty exemptions will mean the assembly plants will make next to no contribution to Haiti's economy.

In the Shadow of the Sweatshop.