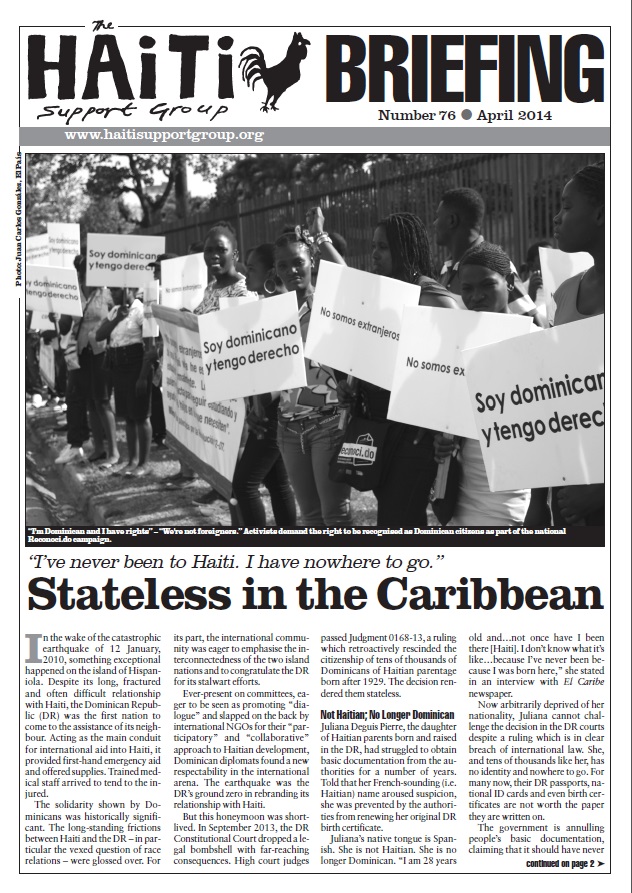 Stateless in the Caribbean (HB76)

Stateless in the Caribbean. In 2013 the Dominican Republic Constitutional Court rescinded the nationality of hundreds of thousands of Dominicans of Haitian parentage sending shockwaves throughout the Caribbean and wider Americas with far-reaching consequences for the region and beyond.

Condemned for its discriminatory and retroactive nature, those affected have been criminalised for the origin of their parents, grandparents or even great-grandparents. Barred from a range of services - including the most basic of citizenship rights - Dominicans of Haitian descent are struggling to gain access to a state education and healthcare services and now no longer have the right to work or vote in their country of birth.

Haiti Briefing no. 76 examines why the Haitian authorities have been hesitant to condemn the illegal treatment of Dominican citizens by their own government even when the ruling was in clear breach of international law. We also look at a worrying rise in Dominican nationalism and attempts by the authorities to confuse a matter that affects citizens born and raised in the Dominican Republic with the issue of Haitian migration to the country.

The Haiti Support Group's latest Haiti Briefing no. 76 is now out in English, French and Spanish. Entitled "Stateless in the Caribbean", this edition examines the decision taken by the Dominican Republic Constitutional Court in September 2013 to rescind the nationality of tens of thousands of Dominicans of Haitian parentage. Significant on many levels, the ruling sent shockwaves throughout the Caribbean and wider Americas and has far-reaching consequences for the region and beyond.