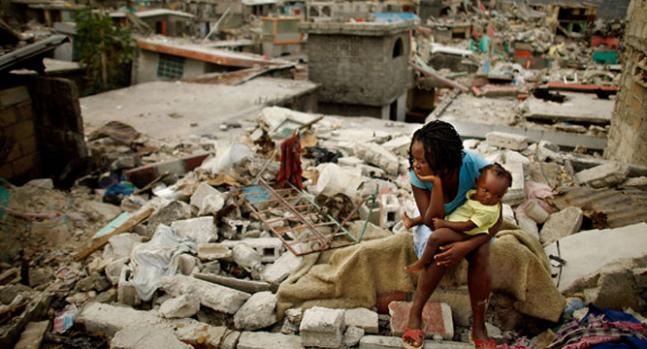 The earthquake of 12 January – our assessment

The earthquake, measuring 7.1 on the Richter scale was a natural phenomenon. However, the scale of the loss of life, injury and destruction, the worst in any natural disaster for 65 years, was not. The death toll was a direct result of the surge in migration from rural areas into Port-au-Prince and its suburbs in the last few decades.

That in turn was a function of the abandonment of the provinces, with no significant government or international investment in agriculture, schools, health care, power or water supply.

Since the 1970s, hundreds of thousands of people have abandoned the countryside and come to the capital Port-au-Prince to try and make a living and give their children a better chance. This human wave has overwhelmed the city and the rudimentary services that serve its population. The result is completely unregulated construction, poor or non-existent sanitation, a meagre supply of unpiped water, constant power outages, and the uncontrolled spread of poverty-stricken shantytowns.

This mass migration is a consequence of the complete and continued neglect of the provinces by both central government and the major multilateral development institutions. There has been no significant investment in agriculture — either subsistence or commercial — despite the fact that the vast majority of the population are peasant farmers. Next to nothing has been done to repair – let alone extend – irrigation systems. There are no state subsidies for fertilisers, seeds or tools, no marketing boards or state-sponsored credit agencies and there have been only token government efforts to issue valid land titles or ensure security of tenure through rent controls, taxation of fallow land or ultimately land distribution through an agrarian reform programme.

But neglect is only one side of the story. What intervention there has been has often been disastrous for Haitian farmers. In the mid-1990s, import tariffs on staple foodstuffs were reduced then eliminated. The avalanche of cheap, invariably subsisided staple imports from the United States and Canada, was the final nail in the coffin of many Haitian farmers. Whole families have upped sticks, particularly from the key rice-growing area of the Artibonite valley, migrating to the city where many were amongst the hundreds of thousands who perished on January 12.

Many Haitian civil society organisations struggling to fill the vacuum left by national and local government in the countryside, have for decades advocated a sustainable, decentralised development model which, if pursued, would have made rural life and livihoods much more viable and thus mitigated the loss of life on January 12. Nearly twenty years of experience in dealing with these issues has convinced the Haiti Support Group that they are right. Hence our commitment to ensuring that the voices of such CSOs and their members are to the fore in the development debate in Haiti. It is, we believe, a debate which must be led by the people most affected by the consequences of the policies of those in power, namely the country’s poor majority.