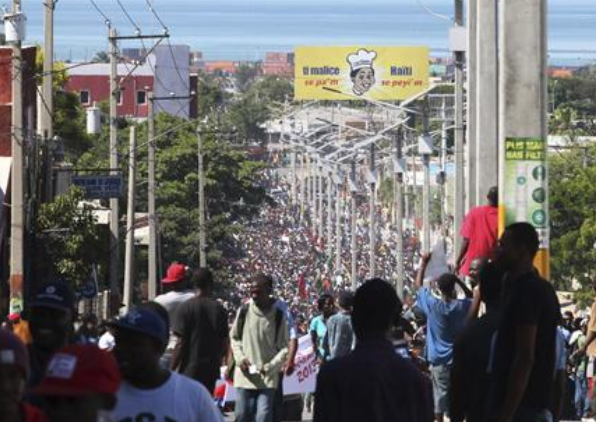 Campaign for Freedom of Expression
Duvalier Hearing Could be Historic Despite U.S. Obstruction

(Reuters) – Thousands of Haitians took to the streets on Monday calling for President Michel Martelly to resign, and some protesters scuffled with police as international concern mounts over rising violence in the impoverished Caribbean nation.

The crowd marched up the busy commercial street of Delmas to the wealthy suburb of Petionville where rocks were thrown and police responded with tear gas, but there were no immediate reports of injuries.

It was the largest anti-government protest since Martelly took office in May 2011, surpassing scenes in May this year when deposed former President Jean-Bertrand Aristide made a rare court appearance.

The protest was held on the anniversary of the Battle of Vertieres in 1803, marking the final defeat of French troops in Haiti’s struggle for independence and the abolition of slavery.

“We are taking the streets to demand President Martelly’s departure,” said Volcy Assad, a spokesman for the pro-Aristide Fanmi Lavalas party. “Martelly represents the minority which has always kept the people in misery, in pain …. We want to write a new page of history for children to have access to water, education and food.”

The United Nations peacekeeping mission in Haiti on Saturday noted the resurgence of violence and killings in the notorious seaside slum of Cite Soleil in the capital, as well as the northern city of Cap Haitien.

“Such crimes are particularly disturbing as they endanger the safety of all, and the social peace that Haiti needs to move forward on the path of strengthening rule of law and socio-economic development,” mission head Sandra Honoré said in a statement.

She reiterated the U.N.’s commitment to support Haitian authorities, especially the Haitian National Police, to prevent violence and to strengthen the rule of law.

Last month the U.N. Security Council extended the mission in Haiti until mid-October 2014, and reiterated that building the capacity of the Haitian National Police remains “a most critical task.”