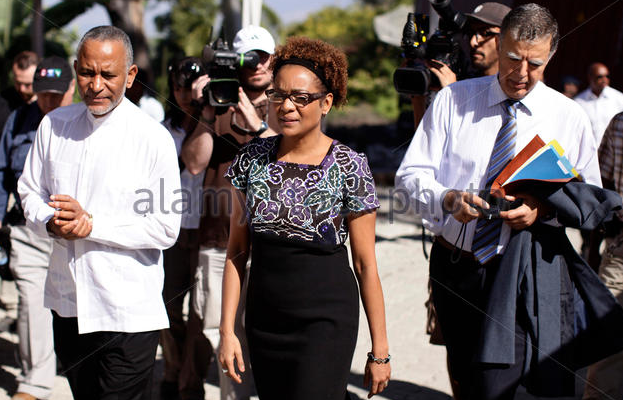 HSG recently attended a lunch with Michaelle Jean, the UNESCO Special Representative for Haiti and former Governor General of Canada. She lived in Haiti until when aged 12 her family fled the Duvalier regime. She became a respected academic and journalist, also dedicated to charity work before being chosen as Governor General.

This was an interesting meeting which brought together Haiti experts from academia, INGOs and political life in the UK and Canada.

It is well known that Jean in her current role focuses much on the importance of education (the poor currently being ripped off in most cases by sub-standard private sector schools) for Haiti’s development, but she also stressed the need to create a domestic economy (UNESCO is sponsoring projects aligned with the GOH Action Plan of spring 2010 largely designed to promote alternative tourism (see their project plans “Making Culture a Motor for Reconstruction”)), and the importance of strengthening the State to deliver public services effectively. Jean is an impressive advocate for Haiti, genuine and passionate, and one could come to the conclusion that Haiti’s grassroots CSOs would find in her a good advocate for fundamental reform in Haitian political culture. Among the best the Haitian diaspora has to offer.

In the discussions HSG stressed the need for Haiti to be allowed firstly to develop a domestic market, abandon (Prof) Collier-style neoliberal plans, reform the IHRC so that it a) becomes Haitian-controlled and b) properly takes into account CSO concerns/suggestions. The international community should allow Haiti to raise import tariffs – we reminded those present of Clinton’s March 2010 mea culpa on this issue and denounced Tom Adams’ (Haiti Special Coordinator in the State Department) recent comments on the affordability of such a move by saying that if the US was allowed to subsidise its farmers, so should Haiti.

All this seemed to fall on fertile ground with Jean, who may well at some point be seen to be an ideal successor to Bill Clinton when the latter feels he has done enough in his bid to earn the Nobel Peace Prize.

There was general disappointment in relation to the IHRC’s performance (reflecting poorly on Clinton). Based on HSG research into IHRC we said that EU governments should push for more political engagement by the EU in relation to good governance, pointing out that EU officials had been clear about its shortcomings. With Ashton being committed to the good governance theme this is an advocacy theme which HSG will pursue.

There was hope that the oligarchical domestic elite could be weakened if more FDI was attracted which the diaspora could partly provide. Since Martelly’s campaign was strongly supported by sectors of the diaspora that hope may be justifiable. However, there was concern that Martelly has no real party/domestic movement from which to draw support for any reforms.

There was also concern about certain right-wing tendencies emanating from Martelly. Clearly the jury is still out whether he will prove himself to be a democrat…