KOFAVIV: Declaration of the Commission of Women Victims for Victims 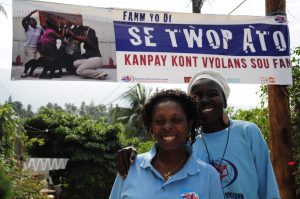 KOFAVIV: Declaration of the Commission of Women Victims for Victims

The Commission of Women Victims for Victims is a group of Haitian survivors of rape from the 1991-94 military coup d’état. We fought unsuccessfully for justice and reparations for years. When, in 2004, we saw that the same women were being raped again, we shifted our work in order to aid these new victims. Because many women who were victimized when we were died from sexually transmitted diseases including AIDS, we provide victims medical care. KOFAVIV works with women victims from poor neighborhoods like LaSaline, Bel Air, Cité Soleil, Grande Ravine, Ti Bwa, Martissant, and Village de Dieu.

We, women victims, many of us from the poorest groups of the population, have decided today to say no to all forms of violence and discrimination to which we have been subjected during the last 200 years.

We are victims of rape. Armed groups have forced their way into our homes, stole everything we owned, raped us and our daughters, burned our houses, and threatened us. Many of us were forced to leave our homes and have been sleeping on the mountainside. We have lost our commercial goods, and we do not have the means to send our children to school. When we open our mouths to speak, we risk being threatened or killed.

We, women who have been subjected to all forms of violence, are standing up to defend our rights.

Haiti has signed more human rights conventions than almost any other state. Yet Haiti remains one of the countries where human rights, particularly women’s rights, are most violated. We know that rights do not mean anything when they remain only on paper. For this reason, we ask the government to implement all of these conventions and to give meaning to the international community’s condemnation of violence against women.

It must be the job of all branches of the government to respect human rights. Parliament must adopt forceful laws to protect women’s rights. The Executive must take strong measures to stand in solidarity with women victims from the last 10 years. The police need to provide security in poor neighborhoods and other areas in order to stop kidnapping and rape. We ask that the state take action in the justice system to end impunity.

We also ask the state to take all necessary measures to aid women who are victims of all types of violations—those whose houses have been burned and those who have been forced to flee and sleep in churches, mountainsides, and porches of homes—so that they have homes and don’t have to rely on the support of other community members.

Ending violence and discrimination against women is everyone’s responsibility. We ask civil society to wake up and condemn this relentless violence.

Where are the political parties? What do you have to say about the women of Martissant, Grande Ravine, Corridor La Fwa, Ti Bwa who have been abandoned with no support? During elections, you know that women were there until the end. All your leaders are silent. Political groups– stop using what we have suffered as propaganda without recognizing our existence. When you do this, you re-victimize us.

When we reflect on our situation, we are able to say that we are victims of rape because we are deprived of our social and economic rights. We live in the worst houses. We have no economic means. So, we are forced to go out to make a living even that means endangering ourselves. As a result, we are more vulnerable to violence.

We say that protecting women’s rights is not only about providing safety from those responsible for these abuses, and that justice is not only about putting them in prison. It is about respecting all of our rights and the rights of everyone because we know that poverty is a reason why many women become victims.

We have the right to work. We ask the state to create jobs for women without discrimination, jobs that will increase women’s economic power so that they can achieve economic autonomy. We ask that the state valorize women’s work. Women working in the informal sector, especially widows whose husbands died during the political conflict and left them with many children, need to have social support. We ask the state to define an economic policy that will increase production and lower the cost of living. This would allow us to live decently.

When we think about poverty and lack of respect for human rights, we see that the economic crisis has roots in the foreign policies of powerful countries towards smaller countries like our own. Powerful countries need to see that rights that we are demanding will never be respected if their policies in poor countries do not change.

The national and international community must know too that health, education, shelter, and access to higher education are women’s rights. Their programs must help women access these rights while making it easier for the state respect to them. They should put in place good programs that will have a real benefit for women. Women must be able to participate in decision-making processes that affect us.

When we heard this week about the judgment against Toto Constant, we felt that a great step forward had been made. We had been waiting for this for a long time. KOFAVIV celebrates the decision taken by an American court against Toto Constant. We congratulate everyone who was fighting to judge this leader of FRAPH. But the fight has just begun and with hope, women will succeed in getting justice and reparations. We will continue the struggle until all criminals have been condemned. This decision gives us a great deal of courage.

All groups that are involved in rape, both those that are perpetrating it and those that are supporting these individuals, must stop violating the rights of women. At the same time, we remind the state that it has the obligation to take all action necessary to prevent all forms of violence against women.

The fight has just begun. Women’s rights must be respected.