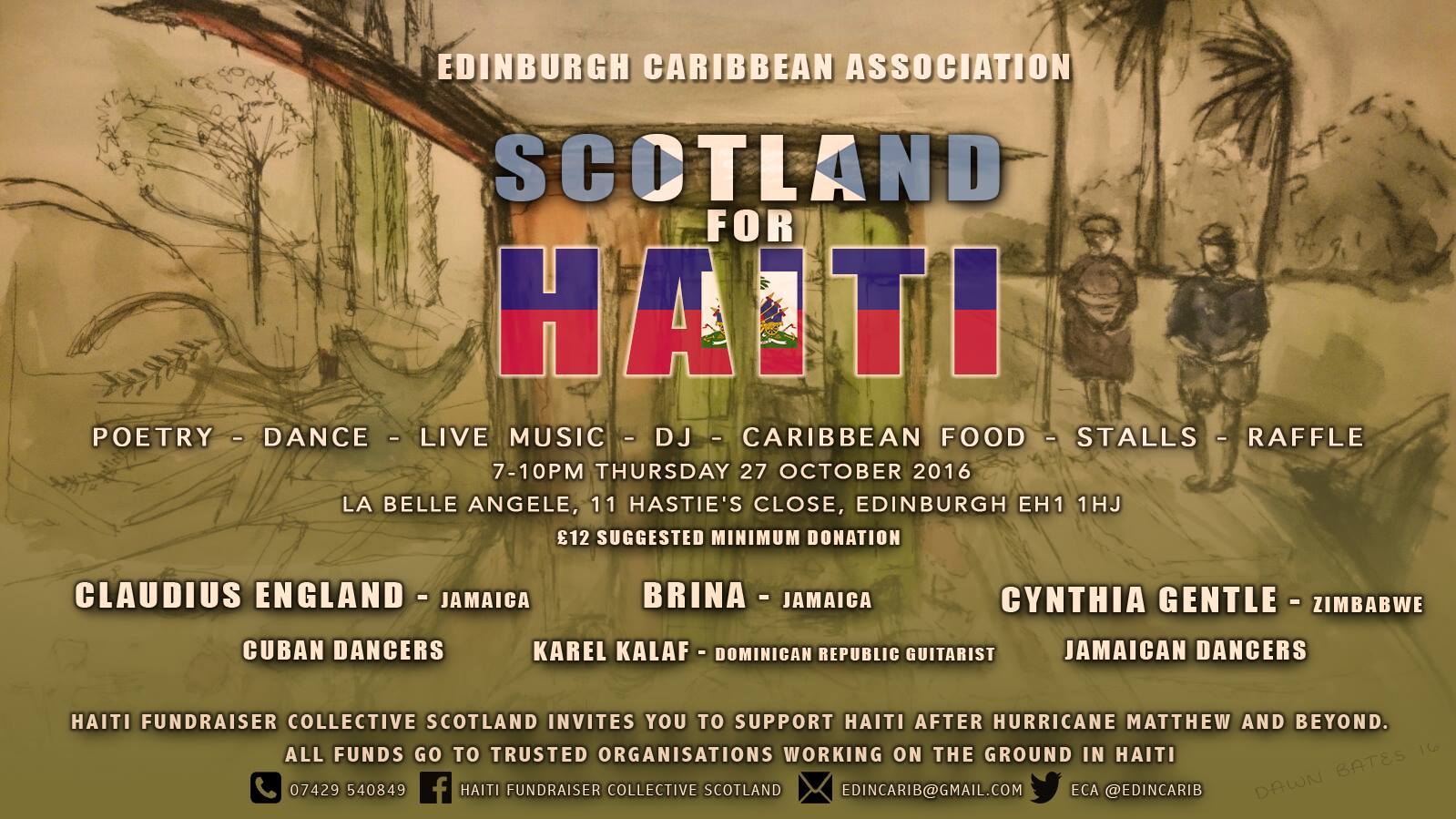 The Edinburgh Caribbean Association, the Haiti Support Group and friends are working together under the umbrella of the Haiti Fundraiser Collective Scotland in solidarity with the people of Haiti in their efforts to rebuild in the aftermath of Hurricane Matthew and beyond.

Ever since Haiti overthrew the shackles of slavery to become the first Black Republic over 200 years ago, it has been punished with a steady diet of debt, invasion and colonisation; leading to coups, dictatorships and near total deforestation. Haiti has been hammered hard again recently, by Hurricane Matthew tearing through the country earlier this month, having barely recovered from the devastating earthquake of 2010 that killed 230,000 and the cholera epidemic introduced by UN ‘peacekeepers’ later that same year, killing a further 10,000 people.

A series of events is planned over the next few weeks, kicking off with a night of entertainment on Thursday 27 October at La Belle Angèle, Edinburgh, headlined by Jamaican reggae musicians Claudius England and Brina, backed by jazz singer Cynthia Gentle and more music, dance and poetry from the Caribbean to Scotland. There’ll be an after party continuing with the sweet reggae tunes of DJ Jobiz, just a short walk away at Tank Bar in the Cowgate.

Two more events in Edinburgh follow; the evening of Friday 11 November will be filled to the brim with poetry, comedy, live music and dance, followed by a reggae and Afrobeats party. A family day on Saturday 12 November will have plenty of exciting activities for children including story telling with Mara Menzies, Zumba Kids, caricatures, facepainting, a bake off and more. The month ends with a bang at Caribbean restaurant Sugar Dumplin in Glasgow to tie in with celebrations for the 50th anniversary of Barbadian independence.

All of the funds raised are going to carefully chosen established and transparent grassroots organisations working on the ground in Haiti.

No to disaster capitalism. Solidarity not charity.

For more information, please contact the Edinburgh Caribbean Association on 07429 540849

You can click here to buy tickets in advance.

Haiti’s revolutionary and intellectual history has lessons for the future