A fundraiser to support trade unions in Burma and Haiti in their fight against exploitation in the garment industry. 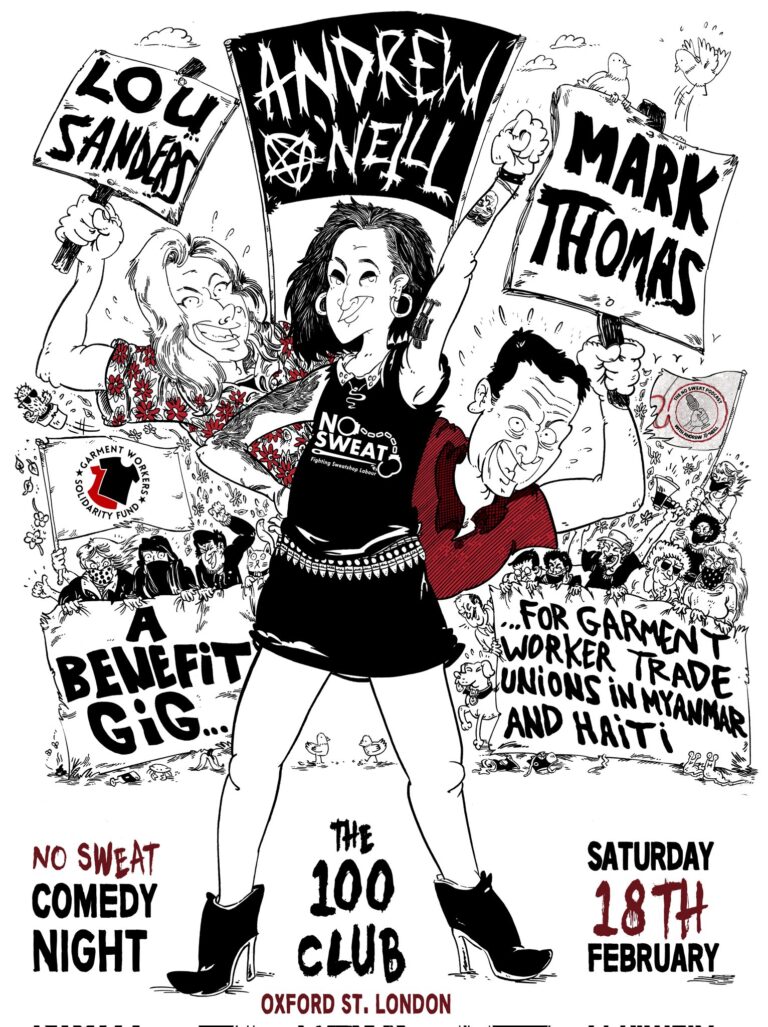 Host of the No Sweat Podcast, Andrew O’Neill joins comedy icons Lou Sanders and Mark Thomas for a night in support of the anti-sweatshop group No Sweat.

No Sweat is a volunteer run, anti-sweatshop group that campaigns in solidarity with garment workers and their trade unions around the world.

The Haiti Support Group has worked with No Sweat on numerous occasions, firstly back in 2004 when we co-hosted Yannick Etienne from the Haitian national workers’ movement Batay Ouvriye on a speaking tour at the European Social Forum, and then again in 2010 when No Sweat organised a comedy night in King’s Cross when Andy Taylor spoke as part of a benefit raising money following the earthquake.

More recently, No Sweat has worked with our former HSG Secretary Charlotte Hammond who has helped provide up-to-date information on the situation of garment workers in Haiti following last year’s mass demonstrations for a living wage.

The Haiti Support Group will be represented on the night by Aïda Roumer and Antony Stewart who will be giving an update on Haiti’s current and rapidly deteriorating situation. You can learn more about sweatshops in our Haiti Briefing.

No Sweat campaigns against sweatshop labour and works in support of independent trade unions around the world. This show is a fundraiser to support trade unions in Burma and Haiti fight against exploitation in the garment industry.

Expect plenty of gags about the Tories, magic and make up from the UK’s finest comedians as well as some more serious conversations about workers fighting for decent pay.

Haiti Update: A Statement from the Haiti Support Group

Join us this Summer to Celebrate Haitian Flag Day and our 30 Year Anniversary!!!

Tickets on Sale Now! Join us to Celebrate 30 Years of Advocacy and Solidarity with Haiti