Phillip Wearne – A Tribute from the Haiti Support Group

Facebook
Twitter
WhatsApp
PrevPreviousThe Past and Future of Rights Cinema: It Stays With You
NextThe Misadventures of Romesh Ranganathan? Haiti Really Deserves Better than this…Next

“The people have spoken – the bastards!”

muttered a US Embassy official at the count of the Haitian Presidential elections of 16 December 1990. This was overheard by Phillip Wearne, an investigative journalist, who stood next to him. The anger of the official was understandable. Through these elections, which for the first time in the history of Haiti deserved the label “free and fair”, the powerless brought to power Jean-Bertrand Aristide, a liberation theologian, who was the product of the people’s long struggle against dictatorship.

Phillip, like so many friends of Haiti, was appalled when the results of these elections were overturned in a coup d’état at the end of September 1991 with the assistance of the US.

When, as a result of this outrage, the Haiti Support Group was launched in the House of Commons on 7 June 1992, Phillip was there to add his considerable drive and intellect to the efforts of a group of dedicated activists, launching a campaign to support the restoration of democracy to Haiti. He was a man of the first hour – and he remained committed to the cause until his last hour, which tragically came much too early, on 14 March 2018, at the age of just 60.

The HSG mourns the passing of one of its greatest advocates and activists. “Driven” is a fitting adjective for Phillip, whose journalistic and campaigning work was prolific in many countries and in many fields. His work as an investigative journalist was outstanding – from print, to radio and TV documentaries. He was an intellectual giant in his field and could have gone into the top echelons of any major media organisation but he was at heart an investigative journalist who thrived working on the ground and he was a highly skilled political campaigner. He found it hard not to get involved with any cause to which he felt he could usefully contribute. These campaigns all had one thing in common – the struggle for social, economic and political justice for those excluded by those in power. To this he devoted more and more of his life as he became increasingly disenchanted with the deteriorating investigative standards in much of the mainstream media. 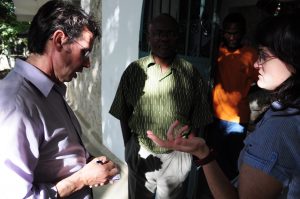 When the catastrophic earthquake of 12 January 2010 struck Haiti with an estimated 300,000 people losing their lives, Phillip was in the right place at the right time. Haiti, familiar with political and natural disasters throughout its history was dealt its worst blow yet. The HSG re-doubled its efforts to amplify the voices of civil society organisations as Haitians sought to make a new start and to create a better society from the rubble of the earthquake.

Just the sort of challenge Phillip thrived on! – bringing to bear his extensive experience from Nicaragua and other political campaigns he had been deeply involved in.

Haiti, or the ‘Republic of NGOs’ as it was it was referred to at that time, hosted upwards of 10,000 such organisations set to take over the reconstruction of the country, often ignoring the real needs of the poor majority. It was a true David and Goliath situation.  Phillip provided much of the analysis and output of the Group at that time and within three months he was on the ground, linking up with the civil society organisations the HSG had been working alongside for many years, listening and getting the analysis from the ground and turning it into persuasive political arguments which we could take to Whitehall, Brussels – from where most of the aid money flowed to Haiti – and Washington. He was instrumental in linking the HSG with the US-based HAWG (Haiti Advocacy Working Group) and ensured that activists in Europe and the US collaborated to speak with one voice.

He was instrumental in all our campaigns during those post-earthquake years and he was the main author of our Haiti Briefing between 2010 and 2015. After UN peacekeepers introduced cholera into Haiti in October 2010, unleashing a lethal epidemic, Phillip threw himself into the campaign in support of victims and their families. He was relentless in gathering the evidence to support policy arguments which he took into the corridors of power of New York and Washington. Beyond reparation and compensation, his aim was to change the protocols for screening peacekeepers so that no other country would suffer as Haiti had suffered as a result of UN negligence. Shamefully, these protocols have still not been revised – but the UN and the world cannot say they have not been told.

It is impossible to do Phillip justice in this short tribute. He is such a massive loss – and above all to his family as well as the many people whose lives he touched directly. He epitomised the best in what a human being can be: determined but caring, intelligent but not arrogant, generous in giving to others, a true team player, always looking to foster new talent and on the look-out for those who would continue to carry the torch. We, who continue the work in the HSG, are therefore a small part of the wonderful and encouraging legacy he leaves behind. He lives on in us and in hundreds of other campaigners around the globe.

And therefore, as Phillip often signed-off:

Additional tributes to Phillip can be found on the Latin America Bureau and the Haiti Advocacy Working Group (HAWG) websites. 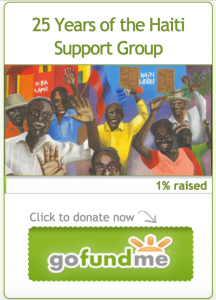 Many supporters and members of the Haiti Support Group
have asked what they can do to help us honour Phillip. With
the blessing of his friends and family, we have taken the
decision to dedicate our GoFundMe page to him.

If you wish to make a donation, we ask that you visit the link
and share a comment with us about your memories of Phillip.

Comments the Haiti Support Group has received about Phillip, his life and his work

“For all those who loved and cared for both Phillip and Haiti. I am sure I don’t need to tell anyone…what a wonderful, committed, and brilliant person Phillip was, and how much he contributed to both Haiti Support Group and the larger cause for justice for the people of Haiti. Such a horrible loss.”

“[Phillip] was…someone who really lived the life he preached — it’s such a loss and horribly sad and tragic.”

“I had the good fortune of sharing ideas at length with Phillip at Gender Action’s offices…and whenever he attended HAWG activities. His commitment was greatly inspiring.  His humour was enormously uplifting.”

“This is such tragic news. I will always remember Phillip for his persistent questioning of all of our assumptions.”

“Phillip once said to me: ‘Keep going, Jasmine, keep going’.  That is probably what he would say to all of us. Phillip:  gone much, much too soon.”

“[Phillip]’s life was dedicated to peace, justice and caring for those he loved. I know I will always remember him and do my best to carry on his spirit and work.”