The Haiti Support Group is shocked and saddened to learn of the assassination of Jovenel Moïse at his private residence in the early hours of Wednesday morning. The latest reports confirm that his wife Martine Moïse remains in a critical condition, having been airlifted to Florida for treatment yesterday. You can watch our interview with SKY as this news broke here.

Moïse was not president-elect and continued to cling onto power despite his term having expired in February this year. He had been ruling Haiti by decree since 2018.

For years, our partners in Haiti have warned of the steady erosion of civil rights in Haiti, as the Moïse administration increasingly resorted to intimidation and outright terror to stifle the growing voices of opposition marching in the streets.

Anger over his initial rise to power was amplified over the Petrocaribe embezzlement scandal. Corruption, suppression, and insecurity are his political legacies. His assassination therefore leaves a chilling reminder of the direction Haiti has taken during his administration, and of the fraught and nerve-wracking climate in which Haitians now live.

The self-styled “international community” has, at best, feigned disinterest. At worst, they have actively supported Moïse in his violent suppression of popular opposition and his attempts to remain in power.

Haiti is at a time of untold crisis. Here at the Haiti Support Group, we condemn the killings and urge all to put Haitian people and Haitian grassroots groups at the heart of their thinking.

We will be holding an Emergency Meeting this Sunday 11 July at 3 p.m. (UK time). We will discuss how we can best proceed in continued solidarity with the people of Haiti. You can register for this online event here: https://www.eventbrite.co.uk/e/haiti-support-group-emergency-meeting-tickets-162638290505

We hope you can join us.

The Haiti Support Group on the Moïse Assassination

Rachel Douglas on BBC Scotland about the Moïse Assassination

Dr Rachel Douglas of the Haiti Support Group speaks with Nick Sheridan on Drivetime, Radio Scotland, about the killing of Moïse and the escalating crisis in Haiti. 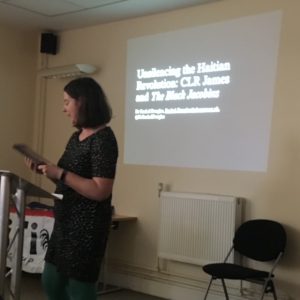